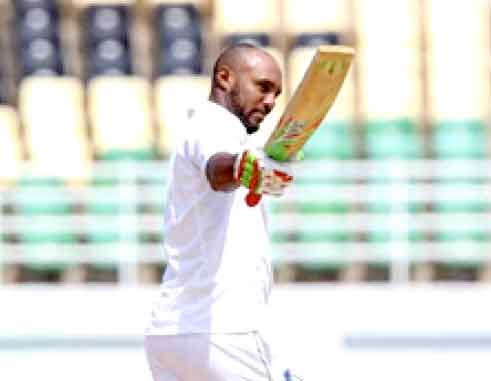 AFTER enjoying two days in the ascendancy, the West Indians ended the drawn tour match in Lincoln on a lower note: they were dismissed for 186 in their second innings and then failed to dismiss Tom Latham and JeetRaval, who are set to open for New Zealand in the first Test, in two hours before the end of the game.

The third day had begun with the West Indians on 53 for 2, leading by 267 runs after a hefty batting effort in the first innings and then their bowlers dismissing New Zealand A cheaply. However, that run of form dipped with wickets falling early: Roston Chase was dismissed by Lockie Ferguson, who was called into New Zealand’s Test squad as cover for Tim Southee, and 71 for 3 became 72 for 4 when Jermaine Blackwood was out for a duck to Hamish Bennett.

Opener Kraigg Brathwaite went on to make 88 and put on 70 with Shane Dowrich for the sixth wicket before retiring out. The innings ended swiftly after that, with James Neesham and Bennett mopping up the tail.

New Zealand A batted 29 overs in their second innings with Raval remaining unbeaten on 32 and Latham on 28. The West Indians used eight bowlers once again, but unlike in the first innings – when everyone took a wicket – no one had success this time.

The first Test against New Zealand at Basin Reserve in Wellington begins on December 1.