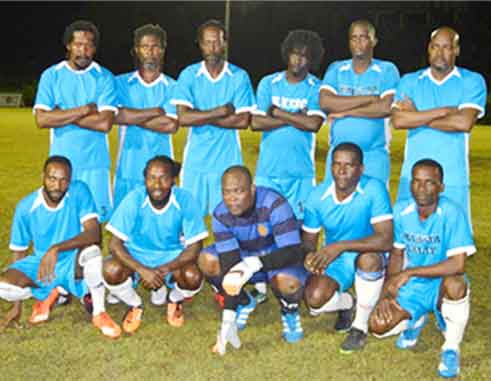 ACTION continues tomorrow in the 2017 Veterans In Sports Inc. football tournament with two matches at the La Resource playing field in Dennery as the teams position themselves for a quarterfinal berth.

From 6:00 p.m. FLOW Lancers FC versus Mon Repos Sharks, while Laborie Veterans will come up against Mon Repos Sharks at 8:00 p.m. Both matches are equally important for the four teams.

Meanwhile, this past weekend there were wins for Vieux Fort South, Micoud, Valley Ledgens, Vieux Fort North, and Caricom Masters, while All Blacks: Dennery and Soufriere played to a hard-fought 1-1 entertaining draw.

On Sunday, Vieux Fort North made amends for their 3-2 defeat at the hands of Soufriere last week to beat Prophets and Kings 2-1. Roland Dolor opened the scoring for Prophets and Kings in the 4th minute, but VFN regrouped to equalize in the 39th minute via the boots of Dickenson Jean to leave the halftime score even.

Jean put VFN in the lead in the 74th minute and that’s how the scoreline remained up until the final whistle.

In game two, between Group C leaders Soufriere on 6 points and Al Blacks: Dennery 3 points, this one did live up to its hype as both teams needed that all-important win. In the end, however, they were quite pleased to settle with one point each.

The halftime score was nil-all, but on the resumption both teams upped the tempo a few notches and All Blacks: Dennery opened the scoring in the 61st minute when Martin Shortie’s right foot shot eluded the Soufriere custodian Doville Edward to his right. Edward had earlier made two outstanding saves to deny ABD.

With only injury time left, Soufriere had to come up with something spectacular and that they did when Phillip Francois received a free ball on the right flank some 35 yards out heading towards goal. He looked towards Dennery’s goal and hammered a powerful right foot shot which eluded the All Blacks: Dennery goalkeeper to his left to give his team the much-needed equalizer in the 90th minute.

In the final game on the evening, Caricom Masters, following their drawn game against Behind the College All Stars, needed a win to keep a close eye on the main championship trophy, while Canaries Veterans had to erase last weekend’s memories when they played Anse la Raye.

Former national player Godfrey Alfred put Caricom Masters in the lead in the 16th minute of play to start things going. But Canaries held on to deny them any further scoring up until the halftime whistle and regulation time.

On Saturday, in game one, Vieux Fort South continued to impress as they defeated Congorians 2 -0 with goals from Daymon Phillip (11th minute) and Pius Norton (15th minute).

Congorians had one of the easiest chances in the tournament thus far, with the VFS goal keeper beaten to his right and falling to the ground in the process after Thomas Augustin passed the ball to LucinsAuguste in the 37th minute only for him to hit it over the goal post. Congorians’ scoring woes continued as Brian Gerson squandered a penalty in the 71st minute, striking a feeble shot straight onto the VFS goalkeeper, who could have even chest-trapped the ball at the time.

In the second encounter which featured Labowi Connexions and Micoud, LabowiConnextions could count their blessings as Micoud squandered a number of scoring chances in the first 15 minutes of play. Despite Micoud’s aggression, LC held on until the halftime whistle to ensure that both teams went into the dressing room nil-all.

Both teams attacked each other in the second half and finally the deadlock was broken as Zacchaeus Doxty’s brilliant header in the 83rd minute put Micoud ahead. Despite going down to Micoud, the men from LabowiConnextions can take a bow for a well-played and entertaining encounter.

In the final game on the night, home team Valley Ledgens turned on the heat on Marchand Veterans with Layton Sandiford opening the scoring in the 16th minute, while Valentinus Joseph made it 2-0 in the 24th minute. Linus Clarke scored one for Marchand in the 43rd minute to end the half 2-1.

It was all even in the second half as both teams kept firing at each other up until the 70th minute when Marchand player CaniceDujon, in an attempt to clear the ball in the six-yard box, only managed to get it pass his own goal line to give Valley Ledgens a 3-1 advantage.