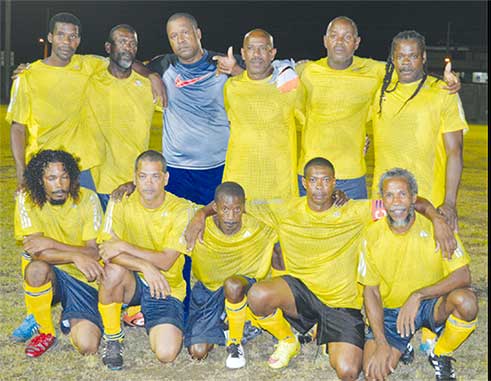 Share this post
WITH nine days to go before the official kick-off of the 2017 Veterans Football Tournament slated for the Phillip Marcellin Grounds in Vieux Fort, the qualifying round dubbed “The Final Four” has been decided and four of the six teams that competed will now join the top sixteen teams already in the pool.

First to qualify were Labowe Connextions; they had wins over La Clery (3-1) and Marchand (4- 0).

Last Saturday evening, Canaries and Vieux Fort North, with one win each under their belt, only had to play for a draw to secure their spots and that they did in an encounter.

In their first game, Canaries defeated Choiseul 2-0 while Vieux Fort North had a 3-0 win over Choiseul.

Also on Saturday, in the main card to decide the final spot, La Clery and Marchand had a go at it. From the first whistle, both teams looked determined to win, but Marchand defeated La Clery despite their poor showing against LaboweConnextions three days earlier.

La Clery looked the better team by far with their fancy play, while Marchand, on the other hand, never allowed that aspect to bother them.

In the 39th minute Lincoln Mathurin put Marchand in the lead to enjoy the halftime advantage.

On the resumption, the poor surface made it rather difficult for the players to execute their passes and even to show off their skills.

Marchand made it 2-0 in the 80+1 minute added on time as Lincoln Mathurin reassured the men from the east their ticket to this year’s tournament. Bobby Willie, who squandered an opportunity midway into the second half, made amends for Marchand as he got one past the La Clery goalkeeper Defreitas Francois in the 80+4 minute added on time to finish things off and a berth into the tournament proper for the first time.

Meanwhile, in the first warmup match, defending champions VSADC, despite having one substuite on the bench, defeated All Blacks: Dennery 1-0, a goal scored by Felix Mark in the 40th minute.

In the second warmup match, Behind the College All Stars had the better of Mon Repos Sharks 1-0, a goal scored by Felix Compton in the 73rd minute. With the return of Trevor Cadet, BTC certainly looked like they are all set to compete on a serious level and will be hoping to up their game this year.

The final warmup game saw Flow Lancers and Vieux Fort South playing to a 0-0 draw in a game where the two teams had a combined five scoring opportunities. VFS, in the process, squandered a golden opportunity when they failed to score from the penalty spot in injury time, only for goalkeeper Vilan Edward to make the save.