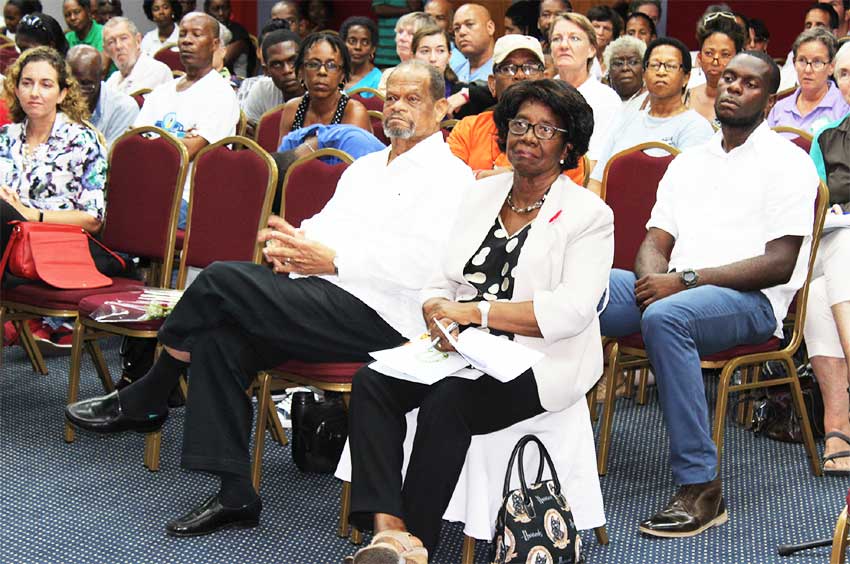 THE incoming Council for the Saint Lucia National Trust (SLNT) has a humongous task on their hands and must act swiftly to ensure that not only do they continue to preserve the nation’s patrimony — but also the Trust’s mandate and sustenance.

Last Saturday, the Trust held its 41st Annual General Meeting at the Finance Administrative Centre at Pointe Seraphine to, inter alia, elect a new Council and discuss the way forward, primarily as its untenable relationship with government continues to worsen.

The marathon meeting lasted just over five hours and included many agenda items. However, it seemed that the crucial issues the Trust has been faced with in recent months were just the fire needed to bring out a large crowd at an AGM as well as stir up discussion on the Trust’s future.

Director of the Saint Lucia National Trust (SLNT), Bishnu Tulsie, told The VOICE that the Trust now needs to increase its advocacy campaign in order to keep such a momentum going.

“I think that we’ve got a clear mandate from members – through a resolution, actually – to step up our advocacy in terms of educating, informing and encouraging people to speak up or to speak out,” he said. “We were actually mandated to do that through the provision of information and engagement.”

He added: “The other thing that came out (of this meeting) was that we need to pursue the dolphin (matter) through the legal channels. We were given that mandate, which we will follow up on.”

Tulsie described new councilors coming on board as “refreshing”, adding that “I think it’s always good to have new thoughts and ideas moving forward.”

Nearly 160 members showed up for the meeting, with Tulsie indicating that the Trust was growing in numbers. Despite its many challenges, Tulsie said support and guidance is there and “we’re looking forward to engaging our members much more in the coming year, so that not only will they be guided but that we will keep them informed of what our challenges are but how we are dealing with them.”

Expressing that he could not go into specifics since the new Council has to be installed, he noted that the Trust’s mandate is clear: that it needs to strengthen its advocacy, engage its members more and put the organization on a stronger administrative and financial footing.

He also provided an update on the proposed dolphinarium that has been at the centre of a contentious back-and-forth with the government.

After being alerted, Tulsie said the Trust went to the public register, saw the entry and wrote to the DCA enquiring on what basis that decision was taken. Through a decision taken by its members, the Trust noted that it would not allow such a facility at Pigeon Island.

“No one ever asked us formally to agree to allow it,” he said. “So there’s nothing on record that says that we agree to the project. Yet, they took a decision to change the land use. We got a response saying that it was just an ‘approval in principle’ which has no significance.”

Tulsie said the Trust also asked for a letter that would provide it with arguments that persuaded the DCA to come to that conclusion and was told that the Trust could have a meeting with them. That meeting, he said, was postponed twice.

“As far as we know,” Tulsie said, “the land use change has been approved ‘in principle’ (but) the concept has not been approved and we do not know what it is the Cabinet will be considering when it goes before them…That’s why the next Council will need to take quick action at the legal level to prevent this.”

During the meeting, Tulsie told members that a foreign-based firm had indicated its willingness to provide legal representation to the Trust pro bono in its challenge to an application made by the investor.

Additionally, three local attorneys, he said, have signaled their intention to join the Trust’s legal battle. However, he said it is now left to the incoming Council as to how the Trust would proceed in that regard.

“Until Council takes a decision on who we are going with, I will not want to put the names out,” he said. “But I think the coming forward of legal representatives – including from overseas – to do this for us pro bono is really giving us a lot of encouragement. It tells us that there are people who are concerned as we are and who are willing to invest their time and resources in fighting for this cause. So we certainly look forward to embracing that and starting that process soon. In fact, as soon as the new Council meets.”

In the matter of the Trust’s Vieux Fort office which needs refurbishing, Tulsie said the office was initially designed to be a museum and interpretation centre. However, since the facility is not air-conditioned, it becomes difficult for the staff. The matter, he said, should be rectified shortly.

“We have developed the plans to do some renovations to install some air-conditioning. But that had to be put on hold. We have now identified the funds to do it, but because we’re in transition, we’ll just await the new Council to take a decision on moving forward,” Tulsie explained.

In the Chairperson’s Report, former Chairperson, Vasantha Chase, whose report was read by another Trust member, noted that the Trust has either had to scale down or axe some of its plans following the loss of the $700,000 government subvention this year. However, new membership seems encouraging, but the Trust’s coffers are still feeling the financial pinch.

Tulsie said the Trust has spent a sizeable portion of its finances on maintaining the many sites that fall under its responsibility, which cost close to $1 million annually.

One of the points raised during the meeting had to do with whether the Trust should consider charging an entry fee for some of the sites it manages, including the Innniskilling Monument on Morne Fortune, which is a popular tourist attraction. In lieu of the $700,000 annual government subvention that was discontinued earlier this year, it was felt that the trust needed to adopt a more business-like approach to its portfolio.

When The VOICE posed the question to Tulsie, he said there are scenarios that needed to be considered before embarking on such an approach. However, he believes that to make up for the financial shortfall, the Trust would need to be more proactive and realistic about generating funds to continue its challenging work.

“The Council had always taken the view that there are some sites – because of their open nature – will cost too much for us to implement a fee-paying system,” he said. “Council was happy to maintain that for people to enjoy (these sites). I mean, scores of taxi drivers, vendors and tour guides make their living off (the site at) the Morne, a site that we maintain. But now that we’re pushed into this financial position, we have to revisit that to see how we could also make some money from those sites and not allow the free enjoyment as we were doing in the past.”

A few days ago, the Walcott House on Chaussee Road, which was closed earlier this year in response to the discontinuation of the government subvention, was vandalized. According to Tulsie, someone made off with the compressors for the air-conditioning units which were installed outside the building. However, the unfortunate story did have a great ending, he said.

“We got help from the guys next door to identify who took them, locate the place where they were stored and we were able to retrieve them,” Tulsie said.

Tulsie, who has been granted another year in the post, said Walcott House will soon reopen pending some special arrangements the Trust is mulling with key stakeholders.

“We are exploring options with some partners to see if we can put together a consortium of interested parties to help meet the cost of re-opening Walcott House,” he said. “We have some of that in place already but we are engaged in discussions with others. Once we get the support, we’re going to make that formal announcement and have the (building) open, even on a limited basis.”