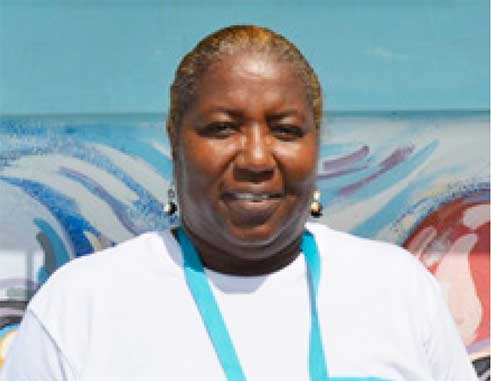 SAINT LUCIA Amateur Swimming Association Development Officer and Meet Director of the recently-held 27th Organization of Eastern Caribbean States (OECS) Swimming Championship, Yasmine Tyson, recently spoke to The VOICE about some of the issues discussed at the Congress held during the championship held at the Rodney Heights Aquatic Centre.

She noted that next year’s championship will be held in Antigua and Barbuda and that a high level of organization and friendly rivalry in the pool is expected.

Tyson said, “Some of the issues that were discussed around the table were to what extent are the various federations going to enforce the FINA Rules. There are some adaptions that need to be made. The OECS championship is a developmental meet for all the islands; this is the platform for the annual CARIFTA Swim Championships and also for the swimmers to move forward to bigger meets. We had a good, hard look at some of FINA ruling and to what extent we are going to enforce it.”

She continued, “Highly-qualified FINA official, Errol Clarke, was the Meet Referee. There were some calls that were made and questioned by a few of the federations and moving forward as an OECS, he asked what standard we wanted to hold our swimmers and coaches accountable to.”

One of the teething issues that were raised was that of the taping of athletes and medical clearance being needed for it.

She said, “We as federations are going to accept that swimmers will be swimming with tape. The decision is an open one; however, for two swimmers we disqualified with taping, medical clearance was not presented for them at the technical meeting. However, after the ruling was made, medical clearance was presented and they were allowed to swim with the taping moving forward.”

In terms of swim suits, she said, “the discussion basically was that not many parents are able to afford to purchase two or three swim suits for their child. A decision was taken that we will accept what they have for now and moving forward, as we progress as federations, we will decide to what extent we are going to rule on the swim suits.”

There are a number of minor issues the federations that still need to iron out.

This year’s championship was very keenly contested and a successful one in terms of organization and the level of competition. Tyson said, “We missed Martinique, Dominica, the BVI and Saint Marteen. They all suffered setbacks following the passage and destruction left behind by Hurricane Irma and Maria. At Congress, we also discussed that aspect. We will be reaching out to them. Their situation will be tabled at the next FINA Congress meeting to see what assistance we can give them in getting them back up and ready and hopefully welcome them in Antigua in 2018.”

Tyson added, “In terms of competition, Antigua and Barbuda and Saint Vincent and the Grenadines continue to step up nicely, but for SVG they don’t have swimmers in the 15-and- over category, so they will be suffering a setback. They came to Saint Lucia with 26 swimmers and it would be a difficult to challenge for the championship with the likes of Grenada, Antigua and Barbuda and host Saint Lucia having their full quota of 34 swimmers.”

Antigua and Barbuda continue to make a bold statement, finishing second last year and third this year, an indication that the sport is growing on that island.

Grenada and Saint Lucia, like previous years, continue to go at each other in friendly rivalry and that augurs well for the sport between the two islands. Grenada just nosed ahead of Saint Lucia by one to make 14-13 in teams of championship wins.

Tyson said, “Next on the calendar for Saint Lucia, swimmers will see most of the clubs in Saint Lucia participating in the Amateur Swimming Association of Trinidad and Tobago Invitational Age Group Championships in December to close off the year. In 2018, the local swimmers will splash off with the annual Independence swim meet and that will start things going for the CARIFTA Swimming Championship as well.”