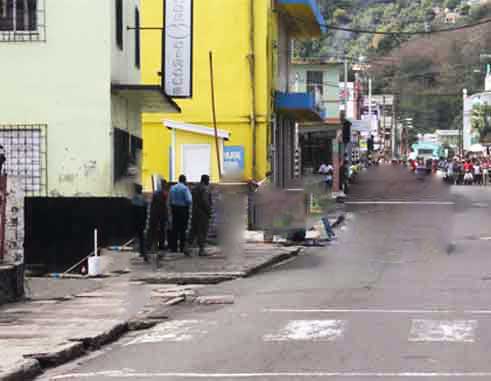 AS I drove home via Chaussée Road last week Wednesday afternoon, something about it looked and felt happily different, though I couldn’t immediately put my finger on exactly what. On impulse, I stopped about midway to call in at the Island Pharmacy. I was pleased that I did, for there I was to discover the reason for the positive feeling which had overcome me as I wended my way along that busy thoroughfare.

It was unsuspectingly revealed by pharmacist Callista Chamaro-Mc Lawrence when, at some point during our general conversation, she clued me in with great pride and satisfaction on the recent ‘Chaussée Road Clean-up’ which had been undertaken through the inspiration and initiative of her group, CROBA (Chaussée Road Owners of Business Association), and which proved to be a resounding success.

Of course, that was it, I mused: a spanking clean thoroughfare with piles of rubbish gone, trimmed vegetation, gutters minus their overflowing gobs of mud, building façades brushed or washed down. In other words, a general de-mucking operation — no skiving, no shirking. And we’re talking the length and breadth of La Chaussée from east to west, or if you like, from the Marchand end to the Calvary end. I have to say that little fact took me somewhat by surprise: when they said Chaussee Road, they meant Chaussee Road — no exaggeration!

Mrs. Mc Lawrence went on to boast of the unity displayed by all categories of Chaussée-ites (my word), and that included the business owners/operators – big and small, the permanent dwellers of Chaussée proper as well as residents of the surrounding ghettoes and other communities in the immediate vicinity branching off from the main road.

Surely, on the face of it, a motley crew to onlookers and/or passers-by, but in actual fact a bunch of thoughtful, dedicated, industrious, proud St. Lucians with a single purpose in mind: to come together and work harmoniously to achieve their objective of cleaning up and serving the neighbourhood in which some work and others live, a neighbourhood which itself serves them all in useful ways.

Yes, young and old, employer, employee and unemployed, red and yellow, all involved that Sunday, October 8 between 7:00 a.m. and 5:00 p.m., stopping for a lunch break and getting back to work in order to attain their goal of making “The Chaussée” shine again! And not just for themselves, but for the rest of us, too, whom it also serves.

Doubtless, this must have taken efficient planning, organizing, lots of convincing and hard work. And, from what I’ve been told, it certainly isn’t going to be, like so many good efforts, a one-off thing; the group is determined to keep up the action. So I cannot but commend most highly the CROBA team and its movers and shakers for their resourcefulness and enterprise, and all involved for their participation and contributions. Through this piece, I shine a bright light on them.

Now, I would so like to believe that the obvious thoughts have struck all who are reading or would read this important good-news story: the coming together with its attendant breaking down of barriers, the power of unity of purpose in achieving positive results, the transfer value which results from such an endeavour in terms of inspiration to others and its consequent replication, as well as the spawning of associated and/or other initiatives, both the expected and unexpected synergies, the joyful serendipities. The overall, lasting good feeling which ensues from the unusual combination of various demographics working together, the formation of character and building of discipline, especially in the younger participants, the dawning awareness that it’s not all about ME but about US, about our Saint Lucia.

I could go on and on — however, without going into finer detail, I simply pose the question: Can you not think of so many simple, practicable ways in which all of the preceding benefits could happen – and happen tomorrow with consequential effects? Just think of the new Saint Lucia we could have overnight, as it were, with one thing positively impacting another and both the domino and ripple effects soon kicking in reflexively as they inherently do.

And who knows, though I’m not prepared to go there yet, just perhaps the materialisation of something of a fountain effect where our wonderful example might rub off on our intractable leaders and then, well, we could really charge ahead, get things done and make meaningful strides at all levels in this Helen of the West. Or not.

Today I choose Optimism – no, no, no, not the cockeyed variety. The simply unbridled, viable kind! What about you?