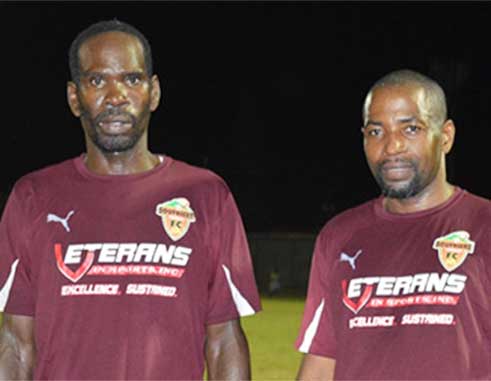 DEFENDING champions VSADC went down to Vieux Fort South in the tournament’s first major upset in game three on the opening night of the 2017 Veterans Football tournament at the Phillip Marcellin Ground.

Watched by a crowd of well over 600 fans, the defending champions from Central Castries never looked a shadow of themselves against last year’s Plate Champions.

The score was goalless at the end of the first half, thanks to some brilliant goalkeeping by Stanley Lesporis of VSADC, who on two occasions within minute of each other, was called into action between the uprights.

On the resumption, VFS quickly moved into gear as Francis Samuel found the back of the nets in the 45th minute. Despite several attempts to goal by VSADC, the VFS defense was tested, but they held their nerves until the final whistle as defender Tryon Clarke cleared the ball inches from the goal line. Had he failed to clear, it would have given VSADC a draw.

In the opening game of the tournament, rivals Behind the College and Caricom Masters played to a 1-1 draw.

CEO of Veterans in Sports Inc., Alvin Malaykhan, started things off with the fastest goal of the tournament when he put Caricom Masters ahead in the second minute of play as they found their opponents’ defense napping.

In another game played on the evening, Gros Islet Veterans made their intentions pretty clear when they defeated Micoud 2-0 with goals from Urban Augustin (54th minute) and Roger Celestin (69th minute). Celestin was one of Caricom Masters’ leading goal scorers last year.

On Sunday, All Blacks: Dennerysignalled their intentions as they breezed past Prophets and Kings 3-1 with goals from Hendrickson Collymore (43rd minute) and Mark Francis (52nd and 77th minutes).

Fleming James put Prophets and Kings ahead in the 36th minute to enjoy the halftime advantage.

Prophets and Kings could count their blessings as All Black: Dennery squandered nine scoring opportunities before regulation time.

In game two, Soufriere had the better of Laborie Veterans 2-0 with goals from season campaigner Jerome Serville in the 51st minute and Chester Francois in the 71st minute.

The halftime score was nil-all. Laborie was just unfortunate on the night as they were robbed twice after the ball hit the woodwork and the Soufriere goalkeeper came up with eye-catching saves.

The final game on the evening between Central Vieux Fort and Anse la Raye Veterans was joy to watch. The scoreline remained nil-all at the halftime whistle as both teams played a top quality brand of football despite the poor surface.

On the resumption, the deadlock was finally broken as Anse la Raye’s Mervin St. Croix put his team ahead in the 70th minute. After receiving a free ball from Aloysius Sydney on the right flank heading east, he only had the two players to beat. He finally shot home a right footer which eluded VFC goalkeeper RolumAquinusLucombe to his left and that’s how the scoreline remained.

Meanwhile, the tournament continues tomorrow with two matches at the Gros Islet Playing Field. From 6:00 p.m., Marchand Veterans will play Congorians, while Gros Islet Veterans will want to continue their winning ways when they face Flow Lancers FC at 8:00 p.m.

The VISI train will move to Soufriere this weekend where five matches will be played over two daysat the Mini Stadium.