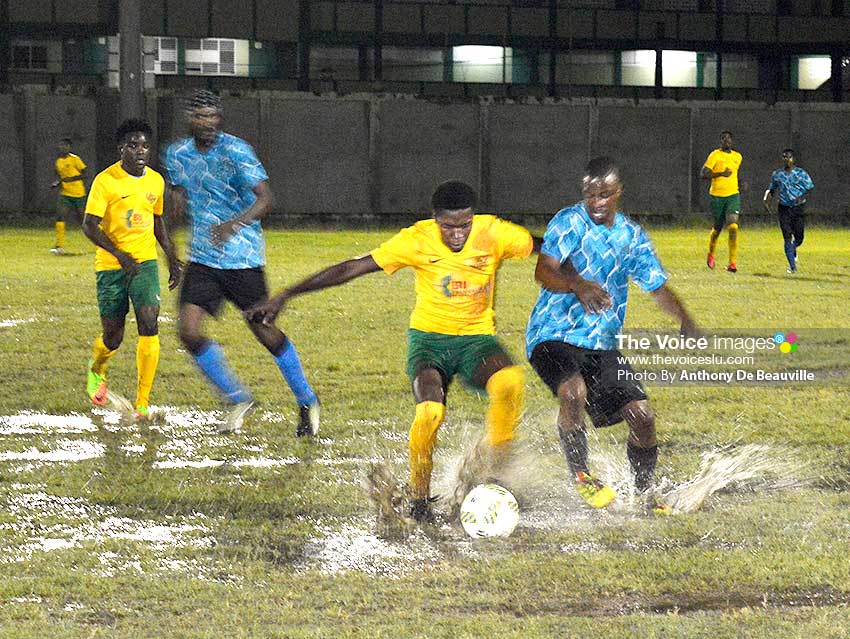 ON a day goalkeeping errors should have been the highlight, the playing surface became the talking point at Phillip Marcellin Grounds in Vieux Fort as heavy rain accompanied by lightning and isolated thunder storms brought along by a trough system forced the match officials to call off the third quarterfinal between Allez of Anse la Raye and Black Panthers of Soufriere in the SLFA President’s Cup on Sunday.

The playing conditions were such that there were talks that the second match — quarterfinal number 4 — might be postponed to a later date.

But Jeff Emmaunel, an executive member of Uptown Football Club and Technical Official of the Vieux Fort South Football League, went out with buckets and two huge pieces of sponge sweeping water off the surface in front of the goal before kick-off.

The underground drainage system, if there was any, did not work as well, as puddles of water over 3 inches were left long after the rain subsided.

At 7:20 p.m., the second match of the evening got going between Jacmel/Morne d’Or Youth Club against home team, Uptown.

With a small crowd in attendance, the game remained evenly poised and goalless at the end of the first half of play as the conditions made it difficult, causing the ball to stop awkwardly, forcing players to adjust to the lack of bounce and rolling. Up to this point, some players thought the match should have been called off.

In fact, one of the Allez players had to be carried off the pitch after injuring his ankle.

FIFA rules state that for a match to be called off, the ball has to float. While that was not the case, conditions were difficult, as the ball began stopping almost from the first minute. Passing became a tricky proposition and players had to make late adjustments while releasing and receiving the ball. It was particularly troublesome near the flanks along the centre line, where the ball was hardly moving anywhere; the long shots were the best option as it did work at times.

On the resumption, it was all Uptown as Noah Nicholas’s two quick strikes in the 51st and 54th minutes and another by Twinkle Actil in the 67th minute put the issue beyond doubt for Allez. Despite two close calls, Uptown custodian Leon Alexander recovered quite nicely to deny the opposition.

On Saturday, in quarterfinal action also at the PMG, GMC of Gros islet defeated El Ninos of Desruisseaux 1-0, a goal scored by Selwyn Boyce, while B1 of Marchand defeated Rovers of Mabouya Valley 1-0.