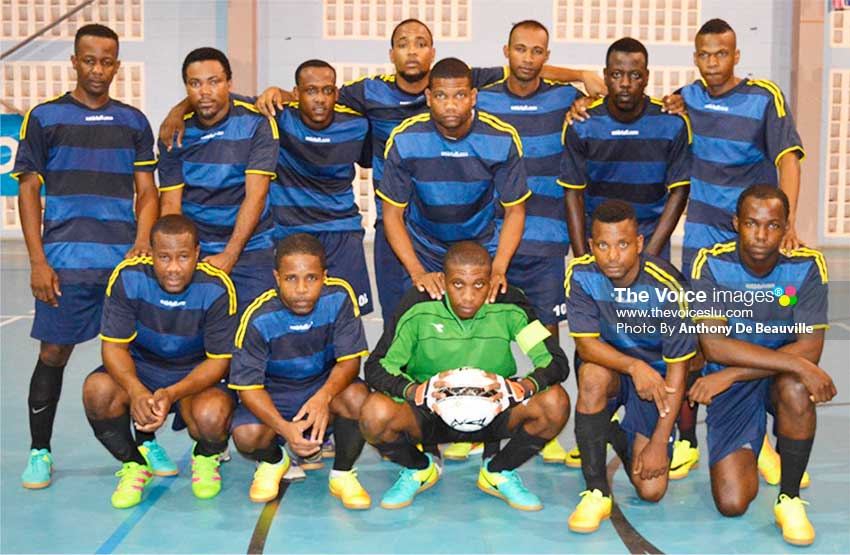 ONE of the main contenders, the Ministry of Agriculture, on Wednesday evening sent out a powerful message to their opponents in the next round of the 2017 Corporate Warfare Futsal Tournament with an 8-1 drubbing of the Saint Lucia Civil Service Cooperative Credit Union at the Beausejour Indoor Practice Facility. That win made MOA the first team to qualify to the round of sixteen.

Wednesday evening was also memorable for one of the Ministry of Agriculture’s players, striker Corey Serieux, who hit his second beaver-trick for the second successive game, taking his personal tally to 8 goals.

Serieux had goals in the 5th, 7th, 11th and 28th minutes, while David Nelson scored in the 10th and 15th minutes of play to secure a 5-0 lead at the end of the first half of referees Leo Clarke’s and Andrew Phillip’s whistles.

Ian Earnest was also on the scoresheet for the Ministry of Agriculture with goals in the 25th and 27th minutes.

Civil Service’s lone goal came in the 35th through Jn. Mill Augustin, a well-taken right foot shot which eluded the MOH goalkeeper Hyacinth Smith to his left to take this year’s goal tally to 54 in 9 matches.

In game two, the Royal Saint Lucia Police Force in a must-win situation played their best game ever to defeat the Bank of Saint Lucia 1-0.

The halftime score was nil-all, but police failed to put away at least four scoring opportunities; BOSL cannot be counted out as they gave the lawmen a really tough time on centre court throughout the first 20 minutes of play.

On the resumption, both teams up the momentum and so, too, the crowd, as the loud shouts could be heard in the distance from all quarters in the BIPF.

Gival Lubin put Police ahead with a right foot shot in the 25th minute of play. Despite several surges by BOSL, the lawmen secured the victory.

In the final game on the evening, Ministry of Infrastructure and St. James’s Club played to an exciting 3-3 draw.

Justin Prospere opened the scoring for St. James’s Club in the 13th minute, while two minutes later, Kurdel Dariah made it 2-0 for SJC to enjoy the advantage at halftime.

In the second half, Infrastructure, with their posse behind them chanting, got things going almost immediately as Stanley Prospere’s two quick strikes in the 21st and 22nd minutes gave them the much-needed equalizer to silence the St. James’s Club supporters.

In the 27th minute, Darnal Reynolds made it 3-2 in favour of Infrastructure. From there, both teams went at each other as the fast-paced BIPF surface and physical play at times took it toll on some tiring feet. With time running out, Tristan Pierre still had a bit of energy left in the tank as he scored the much-deserved equalizer for St. James’s Club in the 38th minute. His goal may well give his team a glimpse of hope of making it to the round of 16.

This evening, the tournament takes a break as the BIPF will host another social activity before the tournament resumes on with three interesting matches.

From 6:30 pm., it’s C.O. Williams versus Sandals; DBC will face CPJ at 7:30 p.m., while defending champions Teachers Union will play the Ministry of Infrastructure at 8:30 p.m.

Meanwhile, Timeout Entertainment co –founder, Lionel John, told The VOICE he is satisfied with the level of play thus far and has seen a great improvement with the standard of play.

He said, “The teams are now starting to understand how Futsal is supposed to be played. Last week saw some unnecessary fouls, but the evening’s showcase has been entertaining and the crowd continues to show up supporting their respective teams.”

After four days of football and 11 matches played thus far, a total of 61 goals have been scored.