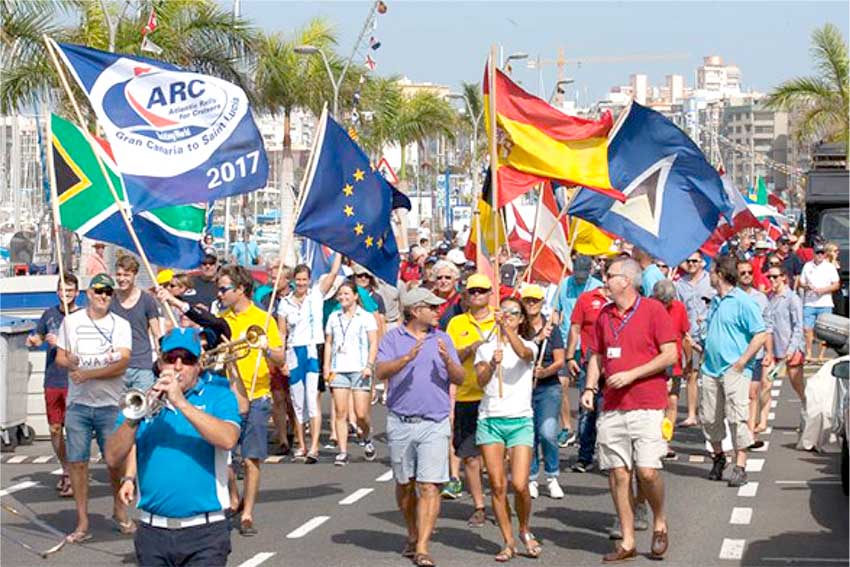 TOMORROW marks the official start of the 32nd Atlantic Rally for Cruisers (ARC) bound for Saint Lucia from Las Palmas de Gran Canaria — 2700 nautical miles. Over 200 boats and close to 1,400 people, including 37 children aged under 16, are sailing with their families directly to Saint Lucia in one of the world’s most popular trans-ocean rallies.

To coincide with this “sail off”, Saint Lucia will be staging the historical Flotilla. It is not certain as to how many boats will leave the Castries Harbour for the IGY Rodney Bay Marina in Gros Islet at the same time as the Las Palmas “sail off” from 12:00 noon. Efforts to reach the organizers, Events Saint Lucia, proved futile.

Regardless of the amount, of local participation the participants are expected to arrive at the IGY Marina about 1:00 p.m.

Meanwhile, the ARC+ fleet got underway in good condition on Wednesday as they set out on Leg 2 of ARC+ from São Vicente in the Cape Verde Islands to Saint Lucia. Conditions at the start were good with a NE wind of around 15 knots blowing across the start line.

On Sunday, November 12, international celebrations officially opened the 32nd Atlantic Rally for Cruisers in Las Palmas de Gran Canaria. Behind the flags of 31 countries representing the nationalities of the boats in the fleet, hundreds of participants who will be sailing across the Atlantic in the rally came together to showcase the international flavour of the world’s largest trans-ocean sailing rally.

Assembling in the northern corner of Las Palmas Marina, flag bearers from different nations joined the procession as it made its way around the marina. The grand parade had a real festival atmosphere and many crews took part in the patriotic display by bringing a boat’s mascot or dressing up for the occasion.

Following the principal flags of Spain, Gran Canaria and Saint Lucia, the international conga line was led by the Banda Gran Canaria, with the Bateria Samba da Ilha beating a salsa rhythm at the back.

A warm welcome to the ARC sailors was made by World Cruising Club’s Managing Director, Andrew Bishop, who thanked the many organisations who have supported the rally’s time in Gran Canaria.

The Tourist Board of Gran Canaria and the Ayuntamiento de Las Palmas de Gran Canaria continue to host over a thousand ARC participants every year, providing a wonderful venue for their preparation.