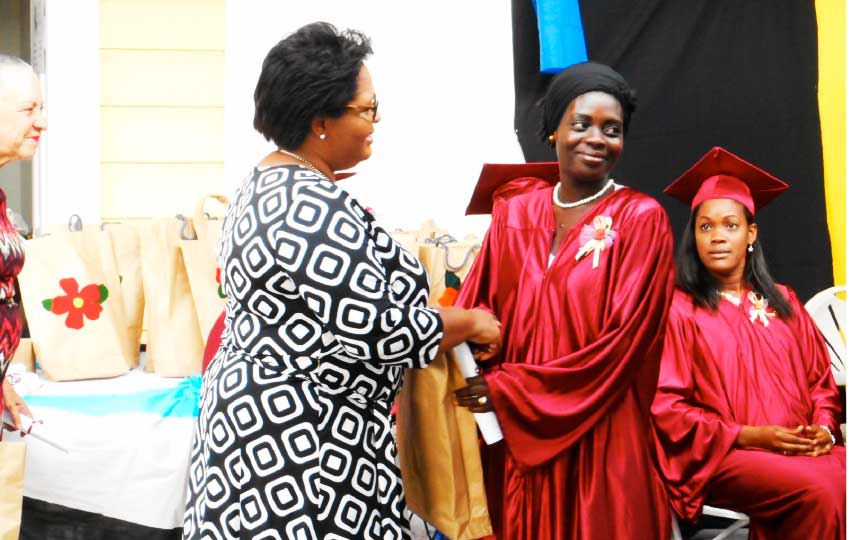 The objective of the programme, which was held at the Papel’s Craft Centre in Laborie from April 6 to July 26, was to enable crafters to obtain a livelihood from the production and sale of crafts.

In her welcome remarks, Manager of Papel’s Craft Centre, Noella Alexander, described the programme as challenging and one which had required a lot of sacrifice on the part of the graduates.

In the feature address, Lucius Ellevic told graduates that their development is their responsibility, and that they should not blame anyone for their failures. He said not all the students who have done the programme have a passion for crafting and used their skills to earn a living.

He said if the students who have done the programme were asked why they undertook it, they would give various reasons, one of which will be because they are unemployed.

“Their reasons may not be consistent with the objectives of the skills training programme, but they are real,” Ellevic said.

He, however, added: “To those graduates who are passionate about earning a living by producing and selling craft — in every business, the first step is to provide customers with goods and services with attributes that customers want.”

Ellevic said the Laborie Credit Union will be providing support for crafters because their success will redound to the benefit of the credit union of which they are members. He said the outcome of the programme will be determined in years to come.

In giving an overview of the project, Avis James described the programme as one with a difference, adding that the programme includes areas which were not included in previous programmes.

James commended SSDF and the CDB for their role in making the programme a reality. She said that from as far back as 2003, the SSDF in collaboration with CDB has assisted the AnseKawet Crafters with funding to conduct skills training programmes.

“They did not only provide assistance for low income earners, but also for all those who want to develop a new skill, and in so doing, improve their standard of living,” James said.

She said the programmed achieved, if not all, but most of its objectives.

Parliamentary Representative for Laborie, Alva Baptiste, called upon the graduates to put their skills into practice, adding that it will help to transform their lives and uplift Laborie where there is an abundance of potential.

He lamented that too many products which can be produce locally are often imported.