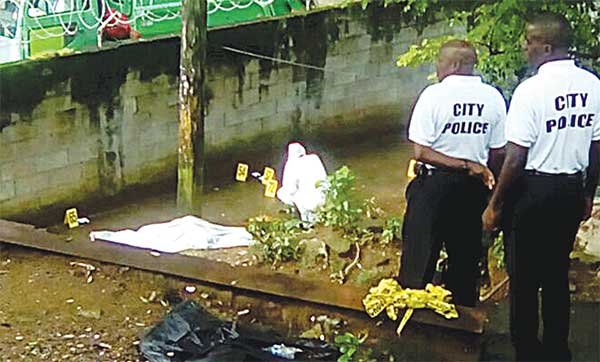 THERE have been 149 homicides recorded in St. Lucia over the past three years and 11 months — six of them by police.

These startling statistics were revealed by the Royal St. Lucia Police Force (RSLPF) during its presentation at last Friday’s crime symposium at the Ministry of Infrastructure at Union.

This year was the bloodiest on record for the country, with its 54 homicides so far, with seven recorded this month and nine in January.

The two unclassified deaths were Curldon Marius of Mon Repos who was shot by a licensed firearm holder, and the other Andrew Nelson alias Archie, who was shot during an altercation with someone police described as “a business proprietor” in TiRocher, Micoud. An inquest will be carried out in both cases. There will also be an inquest into the seventh homicide for the year which occurred in Corinth on January 8.

Meanwhile, the death of an eight-month-old baby girl who was found dead in her playpen with a rope around her neck in May in George Charles Boulevard, Marchand has not been described as a homicide by police. According to police, the outcome is dependent on the results from an inquest.

That an inquest is still pending in those matters more than six months after they occurred is perplexing, however. No reason has so far been given for this.

With regards to the two police killings, one is now before the courts. The police officer was charged and is awaiting trial.

Meanwhile, police have grouped the murders into five categories, namely gang, domestic, altercation, robbery, and unknown. The category is called “unknown” because police have not been able to determine the motivating factor that led to the deaths. This category is said to have recorded the highest murders for the year so far.

In the four years under review, police reported that 2015 recorded the highest drug and gang-related murders followed by 2016.

Police records show that most of the murders committed were in the central sector of the country which is divided into three sectors, the other sectors being the northern and the southern. The officers say that the figures remain consistent with previous years. Further, that the murders were not limited to any one community within the central sector.

Police reported that between January to October murders remain primarily steady in the Castries district and were committed predominantly by young males against other young males using firearms and sharp objects.

The two most commonly used weapons by offenders during the commission of the murders were firearms and sharp objects like knives and cutlasses. In fact, over 50 percent of murders committed this year were with firearms.

Blunt force is a general category representing weapons that will inflict trauma that may result in death, for example, a piece of wood, a stone, physical assault, etc. Police say they will continue to apply a zero tolerance approach to persons found in possession of such objects if they are unable to give a justifiable excuse for having such objects in their possession.

The murder victim profiles re-emphasize the fact that males generally between the ages of 21 and 50 are the primary victims of murder in the country. According to the police report for January to October of this year, fewer women were targeted by perpetrators. However, in one case involving a woman, physical trauma was the cause of death while in the other cases involving women knives were used to murder them. No incident has been recorded where a woman was shot and killed.

Police say that out of the 43 murders committed between January to October, 21 were detected and 18 people charged. One suspect, investigations confirmed, was the perpetrator in the triple murder in Jacmel, Anse la Raye who was killed before he was arrested and charged. Of the suspects charged, 15 were males and 3 females, two of whom were from the Castries district, while the other came from Gros Islet. All the female suspects stabbed their victims.