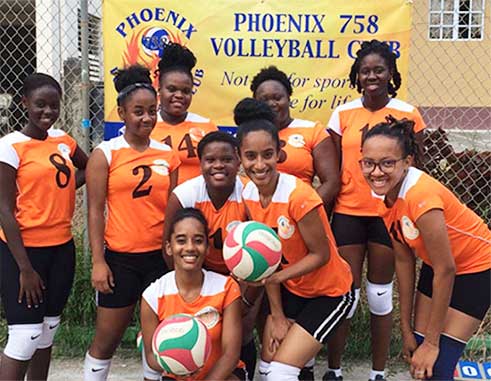 THE annual Bank of Saint Lucia Memorial League men and women volleyball championship served off last Saturday at venues around the island.

In results for the female matches played at the Laborie Multi-Purpose Centre on Saturday, Le Club ladies defeated Phoenix 758 Volleyball Club of Laborie 3-2.

With the score 2-1 at the break in favour of the home team Phoenix 758, Le Club regrouped going into the fourth set to win 25-18, forcing the match into a fifth set, which they went on to win 15-8.

Meanwhile, the league matches will be played on a home and away basis with each team being assigned a home venue and, according to the Saint Lucia Volleyball Association (SLVA), teams must arrive 45 minutes before scheduled match time.

Teams shall consist of a maximum of 14 players (a minimum of 12 regular players). One of the players, other than the Libero, is the team captain, who shall be indicated on the score sheet. Teams may elect to bring more technical and management personnel.

SLVA further indicated that the home team is responsible for the preparation of their home court, sourcing the 2nd Referee, getting lines people, scorers and ball retrievers. Any team not fulfilling its home responsibilities will be fined $25. Teams not getting to the playing venue within 30 minutes of playtime will forfeit the match.

Where discipline is concerned, any abuse, verbal or otherwise, of the referees or other players will constitute an immediate ejection from the game, while Referees’ decisions are final. If a team forfeits a match by refusing to play, they will be fined $50 and can be dropped from the remainder of the schedule.

All teams must be in full uniform for scheduled matches. (Uniform design/colour shirts and shorts, special attention is to be paid to length of shorts. Appropriate uniforms numbers are 1-25. Players must use 1 number for the duration of the tournament

The winning team will take home the championship trophy, gold medals and EC$500, second place a trophy and silver medals and EC$300 and third place EC$200.

All clubs/teams are required to ensure that all registered players have been certified as fit to engage (it is advised that a health certificate from a registered doctor be provided by the player) in strenuous physical activity. SLVA accepts no responsibility in this regard.