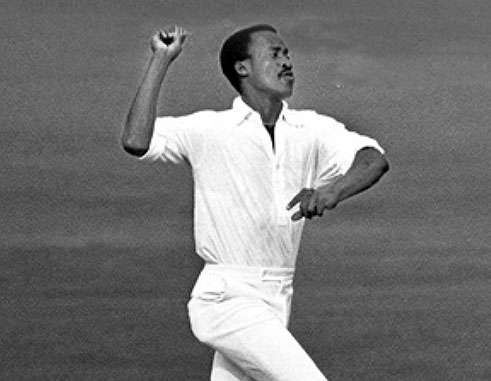 BORN October 10, 1945, Vanburn Alonzo Holder is a former West Indian pace bowler who is more renowned for his accuracy than pace. His career spanned two generations of fast bowling greats. He usually bowled first change to Wes Hall and Charlie Griffith, and later in his career he played with the likes of Andy Roberts and Michael Holding. On his 70th birthday, SuvajitMustafi looks at 14 facts about the bowler who appeared in 40 Tests and 12 One-Day Internationals (ODIs).

2. First-Class debut: In February 1967, at the age of 21, Holder made his First-Class debut against Trinidad and Tobago at Port of Spain. It was an ordinary debut and he ended up picking a solitary wicket.

3. The big match: Later that year, Holder turned up for Barbados Colts and played the visiting Marylebone Cricket Club (MCC) at Bridgetown. Holder dismissed Geoffrey Boycott for 11 and Basil D’Oliveira for naught in the first innings. In the next innings, he dismissed Colin Milburn and John Edrich.

4. Worcestershire: Holder chose the right stage to impress. His dismissal of Worcestershire legend D’Oliveira helped him earn a contract with the county. He was all but two First-Class matches old at that time. In his second game against Gloucestershire, he made a mark by claiming four wickets in the first innings. He played for the county until 1980 and in 1973 he was a part of the Worcestershire Championship winning side.

5. The Test cap: Holder won his first Test cap in June 1969 at Manchester. The only wicket he got in the Test was of Tom Graveney.

8. World Cup winning player: Holder played in the inaugural World Cup in 1975. He played a key role with the bat in the thriller against Pakistan at Birmingham. The match is best remembered for the unbeaten 64-runs last wicket stand between Deryck Murray and Andy Roberts but before that Holder played his part. He was involved in a crucial 37-run stand with Murray for the ninth wicket. Holder scored 16 from 28 balls. Later in the final, it was Holder who was bowling the 59th over for West Indies when Jeff Thomson got run out that resulted in Australia’s heartbreak. West Indies went on to win the World Cup. Yes, he bowled the last over of the inaugural World Cup.

9. The infamous ‘Grovel’ series: Tony Grieg’s ‘grovel’ comment infuriated the West Indians, who were touring England in 1976. They went on to beat them 3-0 in the five Test-match series and Holder played a part in that. It was Michael Holding and Andy Roberts who stole the headlines, but Holder quietly made his mark. Not once in the eight innings he bowled, he picked up more than three wickets, but ended up with 15 wickets in the series at an impressive 24.46.

10. Rampage at Birmingham: Later in the 1976 England tour, Holder claimed his best figures in ODI cricket. In the third ODI at Birmingham, West Indies put up 223 in 32 overs. England started well and had reached 54 for no loss but then onwards it was a Holder show. He picked 5 for 50 from his 10 overs as West Indies cruised to a 50-run victory.

11. A comeback: With the emergence of the likes of Joel Garner and Colin Croft, Holder lost his place in the side but the World Series gave him a chance to make a comeback. West Indies defeated Australia 3-1 in the series in the Caribbean in 1978. Holder who had made sporadic appearances since the 1976 England tour was making a comeback after more than a year. He ended up picking 11 wickets from three Tests at 22.54. He picked his career best figures of 6 for 28 in the fourth Test at Port of Spain.

12. South Africa: Holder made a late comeback in First-Class cricket and turned up for Orange Free State in 1985-86 in two games.

14. Umpiring: Post retirement from the game, Holder took up umpiring. He became a First-Class umpire in England from 1988 to 2012. He has officiated as a third umpire in ODIs.