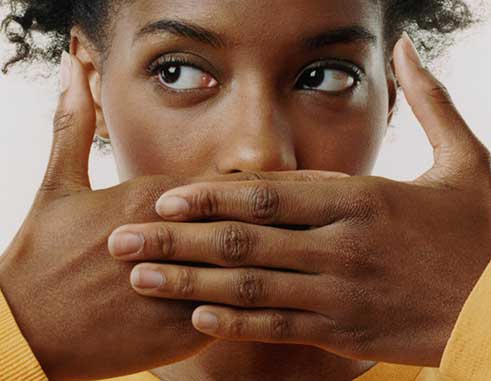 SEEING that we just celebrated JounénKwéyòl, I thought I might use it for my title and also there’s the fact that patois is such a beautiful language and some things just sound better in it.

Yes, I have heard them say this loudly and that mindset seems to be the norm because it makes people believe that by being able to freely speak their minds at all times without thought of consequence or backlash, they are brave and intimidating, and that one would be a fool to step up to them because they will get a tongue-lashing that could send them to the hospital.

While being able to freely speak one’s mind is a good thing, that trait should also always come hand in hand with tact and consideration, traits that many St. Lucians would not know if it was dressed up in neon green and did the “Dirty Wine” on their noses.

My reason for saying this is because of scenarios such as these:

“Aa, my girl, long time I eh see you! You REALLY get/getting fat! You eating too much! You need to go on a diet.”

“Hey, you lose a lot of weight, eh! You feeling okay?”

“Oh, ohhh, what happen to your skin? How you have so many sores? You should try…”

“So long you with that man, what you waiting for again to get married?”

“Woman, you’re in your thirties, how come you don’t have children yet? You need to hurry up because your clock ticking, my girl. You eh a woman yet until you have children, you eh know that?”

Now, do any of these mentioned above sound familiar?

If these words have been said to you, you know the feeling of hurt, anger, frustration and confusion as to why people feel the need to do that to others.

Mind you, and this is where the “boneless tongues” come in handy, I always catch my giggles whenever I hear these words being said to equally free speakers, because the comebacks (or clapbacks, as they are called these days) are as satisfying as finally scratching that unreachable itch.

If you happen to be one of those people who make such statements, firstly, stop doing that! Secondly, how dare you? Thirdly, do you suffer from some form of Asperger Syndrome, or ADHD? Because it is mindboggling as to why you feel it okay to blurt out these statements, almost as if it was reflexive.

If you think this is a good icebreaker, or a form of friendly chatter, then you need to think again because you are dead wrong. There is nothing friendly or right about saying such, no matter how close you are to the individual you are saying it to.

Everything about those statements is ugly, hurtful, insulting and just downright mean. Is it really that hard to just shut up if you have nothing positive to say? You know, just say “Hi, how are you? Have a good day” and move along?!

I swear, we Lucians need to do some serious work on our social skills because the only time I hear many people (please take note on the fact that I said many and not all) being nice is when they are addressing tourists or someone they think looks nice/cute/pretty, or when they want something from someone. Other than that, there is a lot of hostility and tactlessness that is completely uncalled for.

No one wants to be reminded of their flaws, especially if it is something that weighs heavily on their minds and is making them self-conscious.

I am big, yes I know that, I can see and feel it, I don’t need a reminder. That person that you just called “meg”, I’m sure they know it, but you never know what is going through their minds: they could love their size and not want to gain weight, or it could be more serious where they are suffering from some sort of illness – way to go for making them think about their illness!

That woman you just called incomplete because she does not have children, did you ask yourself whether that person can even have children? Did it ever occur to you that this person might have been trying for years to have children but can’t? Or that maybe, just maybe, they see the way your children are bratty and obnoxious and so they are put off from having children on the whole? It’s none of your business, so shut up!

I don’t know if it’s plain excitement, or lack of better judgement, but people, please think, if only for a second before you speak. Contrary to popular belief, words do hurt more than sticks and stones, and cut sharper than a blade, so please be more mindful of people’s feelings before telling them about themselves.