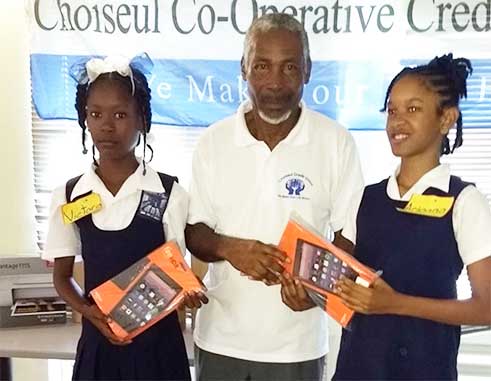 PRESS RELEASE – CREDIT Union Week for the Choiseul Cooperative Credit Union Ltd. (CCCUL) focuses on engagement activities with the schools of Education Districts Seven and Eight. The cooperative caters to the needs of individuals within this basin and often finds ways to give back to the community through various initiatives.

This year, the institution collaborated with the schools to bring about activities which would influence the generations to come on credit union matters, as well as to give back to the community through the children.

The Choiseul Schools’ La Marguerite Festival was sponsored by the organization and was successful even with the intermittent heavy downpour. This did not damper the spirits of students who proudly participated in the cultural event in large numbers at the Roblot Combined School. Seven schools in Choiseul took part in this activity.

The highlight, however, for Credit Union Week, was the first-ever Credit Union Challenge, the brainchild of the Education Committee of the CCCUL. Schools which fell within the umbrella of the Choiseul to Soufriere basin participated in this quiz which incorporated the categories of Language Arts, Mathematics, General Knowledge and an ambush section with questions based primarily on the CCCUL.

President of CCCUL, Gilroy Satney, reiterated the organization’s commitment to the thrust of education and its continued contribution to the growth and development of schools within the Choiseul and Soufriere basin. This further compliments the annual scholarship and bursary programme of the CCCUL.