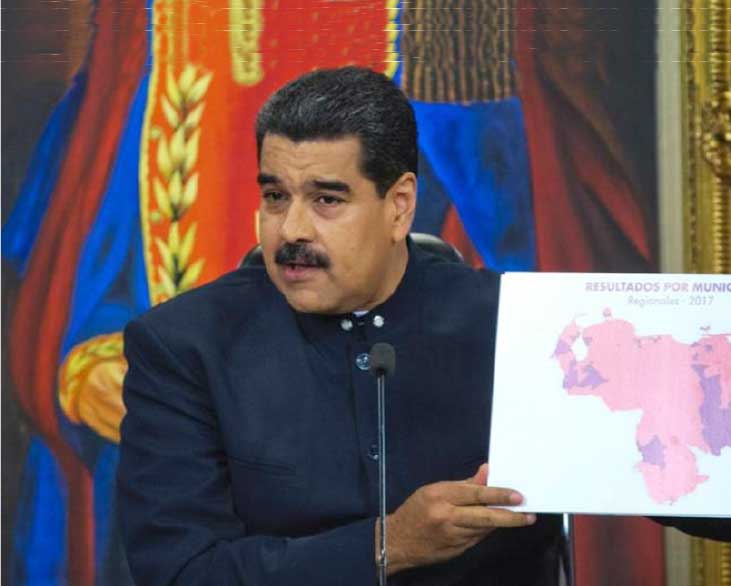 TENSIONS are still high in Venezuela following Sunday’s gubernatorial elections in which the ruling Socialist Party of President Nicolas Maduro won a landslide victory, winning 17 of the 23 governorships that were up for grabs.

The country’s opposition coalition on Sunday night issued an official statement denouncing the results of the elections, claiming fraud and classifying the results as unreliable — even calling for street protests.

But Maduro, who held a worldwide press conference on Tuesday in which The VOICE participated online, rejected claims of fraud by the opposition, noting that not only were elections free and fair as supported by international observers from countries of Latin America, Russia and Great Britain, but that the electoral process was the most secure in the world.

Venezuelan Ambassador to St. Lucia, LeiffEscalona, said results were still pending for the State of Bolivar. The opposition parties, two of them only, won five states. The right-wing Democratic Action Party won four of these five states. It should be noted that the opposition parties won two very important states, Tachira and Zulia, which is an important oil-producing region.

It remains unclear whether the massive win by the United Socialist Party of Venezuela (PSUV) will result in unrest in the country. Between April and July this year, violent demonstrations erupted in Venezuela, resulting in over 120 being killed, more than 1000 injured, and public and private properties damaged against the backdrop for elections to form a National Constituent Assembly (NCA).

The NCA was formed and a referendum called to do, among other things, rewrite, if needs be, the country’s constitution, a point critics say would give Maduro more power than he already has. This did not go unnoticed by Venezuela’s main critic, the United States of America, which has since imposed sanctions against Venezuela.

But Maduro sees Sunday’s victory in Venezuela’s gubernatorial elections as a triumph against President Donald Trump, saying the elections had delivered a strong message to the United States and its allies, who earlier claimed the elections were flawed.

However, Venezuela’s opposition coalition has called for an audit of Sunday’s ballots which Maduro promised will be honoured. The coalition, the Democratic Unity Table (MUD), participated in the pre-elections audit, including those held on elections day at each electoral centre, Ambassador Escalona said.

The three-hour long press conference saw Maduro defending his country’s electoral system, even going as far as providing a demonstration of its efficiency and advantages, priding it as one of the most secure in the world.

Just over 18 million people were eligible to vote on Sunday. Polling stations throughout the country totaled 13,559 with 30,274 voting machines and 4,216 contingency tables.

Ambassador Escalona has denied the existence of a dictatorship regime in Venezuela, claiming that if this is so then it must be a strange dictatorship as Maduro has always promoted people’s participation in each constitutional election and will continue to do so. She pointed to the two national elections held so far this year, stating that the records show both had a large participation of registered voters.

“If you recall, on July 30, elections were held to elect 544 territorial and sectoral representatives that would form the NCA. More than 8 million persons voted in that election process,” Ambassador Escalona said.

“I want to emphasize,” she added, “that the election of the NCA has brought peace and stability to our country. Immediately after the Constituent Assembly was formed within the framework of its constitutional mandate, it initiated a series of actions and measures in the economic, legal and political fields, making advancements towards the governability and democratic stability of our country,” noting that one of these measures included the decision to hold gubernatorial elections, scheduled for December of this year.