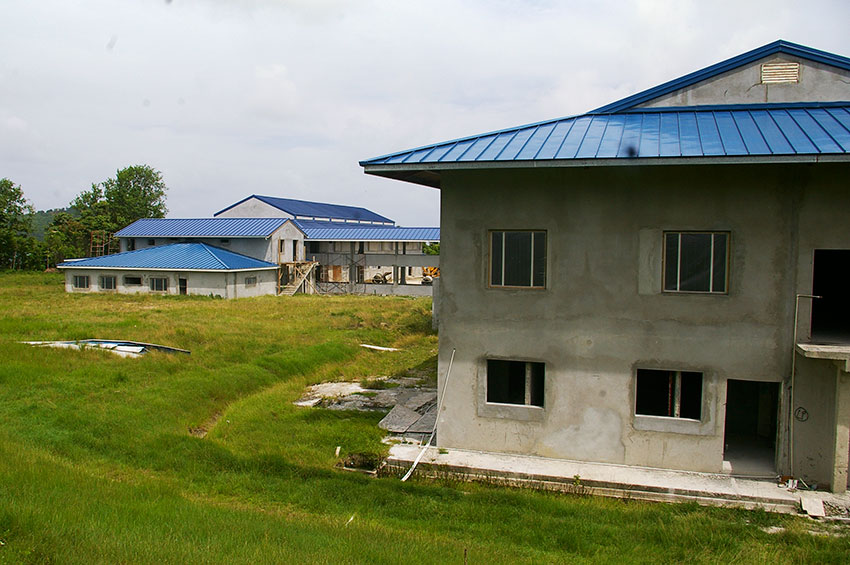 NOW a major source of contention between government and the opposition St. Lucia Labour Party (SLP), St. Jude Hospital seems to be getting the attention it rightfully deserves albeit in the wrong way.

Sadly, however, this newfound attention will not help in hastening a completion date as government is now faced with the task of determining what to do with its incomplete structure that has already cost EC$118 million.

“We are hoping that by the end of this month we can have some clear direction, we can make some clear pronouncements as to what is going to happen (with the hospital) and the timelines we expect,” Economic Development Minister, Guy Joseph, said this week.

Joseph, who has been very vociferous on the subject of late, is asking St. Lucians to remove emotions from their discussion on the St. Jude Hospital Reconstruction Project and deal with the matter realistically.

Three options are before the government pertaining to the unfinished hospital facility. Option one is finishing the existing structure to a standard acceptable by accredited health bodies. This is easier said than done as newly-constructed walls and even the roof may have to be demolished to make way for wider hallways and rooms and a higher ceiling. This would require millions of dollars.

Option two involves performing remedial works at the crumbling George Odlum National Stadium that has housed the hospital’s operations since 2009, something government simply cannot say no to as government cannot provide a date – short-term or long-term — for the hospital’s completion.

Minister Joseph confirmed the need to repair the stadium stating that the makeshift hospital is challenging to work in and is falling apart.

“We are going to do some repairs at the stadium. We are committed to this. We have to take down the existing roof structure. We (government and St. Jude Board of Directors) are committed to redoing the electricals there and fixing the plumbing. That does not mean we are leaving the people there indefinitely,” Joseph said.

The third option is deciding whether a new hospital is needed as there are questions whether the incomplete structure can operate as a hospital in this era.

“We are still exploring all opportunities at doing something with the existing St. Jude building to make it the institution we can move to in the interim,” Joseph said.

Joseph lamented the position in which government finds itself regarding the hospital, noting that in 2009 the government, of which he was a part, responded to an emergency situation by first transforming the nearby Beanefield Secondary School into a make-shift sick bay hours after the hospital went up in smoke, later transferring operations to the stadium. Today, the same government finds itself in an even worse crisis compared to 2009, whereby it needs to complete a hospital in which everything seems to have gone wrong with its construction and where accountability appears to be lacking for the millions of dollars supposedly spent.

Questioning what passes for governance in the country, Joseph delved into a narrative that threw new light on the St. Jude Hospital fiasco and purposefully brought former Prime Minister Dr. Kenny Anthony into the spotlight to answer to certain actions. Joseph said Dr. Anthony bears responsibility for what resulted in the fiasco called the St. Jude Hospital Reconstruction Project.

Both the United Workers Party (UWP) and SLP shared the dream of expanding healthcare in the southern region through several platforms, one of which was the construction of a new and modern health facility on a new site in Vieux Fort. The UWP, under the Stephenson King administration, was bold enough to declare the manifestation of this by 2012.

Joseph admitted that when the idea for a new health facility began under his administration in 2009, it had a price tag of $30 million. He said back then there was an initial plan for refurbishing the parts of the hospital that were destroyed by the fire. That initial plan, he said, required approval from the Development Control Authority (DCA).

He added that he does not know whether that plan was approved by the DCA because the UWP government left office in 2011. Joseph said the incoming SLP administration did not have a plan and that former Prime Minister Dr. Kenny Anthony changed the scope of the hospital project several times.

“There is no plan. I do not understand why people cannot get this. I have called, on several occasions, the people who said they have a plan to give us the plan,” Joseph said, adding that his calls were in vain.

He accused Dr. Anthony of signing several direct awards as Prime Minister and Minister for Finance, commissioning contracts worth millions of dollars that have resulted in the farce that passes as the St. Jude Hospital Reconstruction Project.

“People must stop playing this game of blaming this government and that government. Initially, before the report (audit report on St. Jude), I went through all the information that was available and I thought that both governments were equally to be blamed. I believe we have to take responsibility for what we did in our time. But when the Stephenson King administration left office, we knew what our commitment was to the hospital. What is there now was not done under the UWP government,” Joseph said.

He described the management of the hospital’s reconstruction as “gross incompetence” on the part of the Labour administration and said he would have been ashamed to be associated with a government that allowed a project like the St. Jude Hospital reconstruction to be executed as it has been.

Joseph questioned the views of some members of the public on the scenario playing out before them: how some people could be enraged at what government has to do to fix the hospital but not enraged at the structure given them for the $118 million already spent.

“Can politicians make people so stupid in this country?” Joseph asked.

Government will have to find new plans for the hospital if it wants to complete it, Joseph, said and an engineer will have to be brought in to do as-built drawings, that is, to see what’s on the ground and draw a plan to accommodate equipment and other ancillary apparatuses.