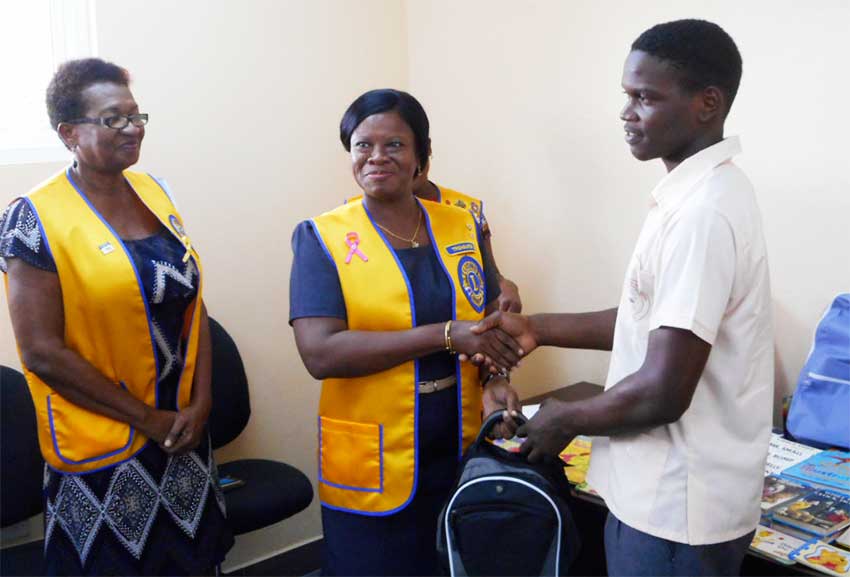 PRESS RELEASE –  THREE students from Micoud were recipients of donations from the Lions Club of Micoud to assist them with their education.

The deserving students, a Form 4 student of Micoud Secondary School and Grade 2 students of the Micoud Primary School and TiRocher Combined School, received monetary donations and backpacks from the Lion Belina Clifford Education Fund, which was established earlier this year by the Lions Club of Micoud.

A presentation of books which the club obtained from a book drive was also made to the Blanchard Combined School.

The presentation was made last Thursday at the Micoud IT Access Centre.

In an interview with this reporter, president of the Micoud Lions Club, Julie Blanchard, said the club was extremely happy to make the donation to the three deserving students who were the first to benefit from such a fund.

“We find it fitting to honour her (Belina Clifford) and continue her legacy. We see her as an inspiration,” Blanchard said.

She described Clifford, who was also an educator, as a Lion who was very supportive of young children in ensuring that they achieved their goals.

She added that the Lions Club of Micoud is committed to assisting those in need and has done a lot of philanthropic work in the community, such as donating wheelchairs and walkers to people in need, and assisting patients with cancer and diabetes.

Principal of Blanchard Combined School, Ellsworth Prescott, described the donations as a very good gesture and called on other organisations to do the same whenever the need arises.