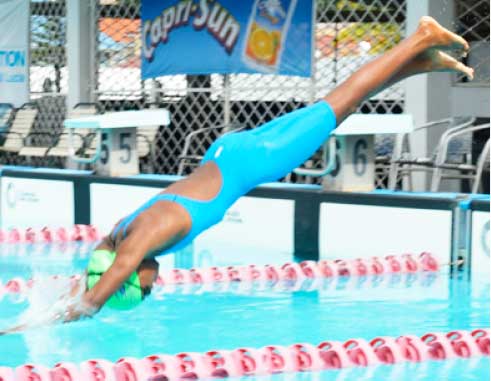 Louis spoke to The VOICE recently about her swimming career which started when she was four years old before she took up the sport competitively at age eight.

Louis is a member of the Lightning Aquatics Swim Club and is coached by Stefania Felix, Marlon and Peter James. Last weekend, she took part in the Capri Sun/OECS Swim Trials at the Rodney Heights Aquatic Centre.

She said, “The trials are over but going into them I set goals that I wanted to achieve for all times. I was not able to better all my times; however, I medalled in 7 of the 9 individual races that I swam and I am confident that I secured a place on the national team to represent Saint Lucia at the OECS Swim Championship next month in Saint Lucia.”

Here’s some more of what she had to say about herself.

The VOICE: How did it all happen for you in swimming?

Naekeisha: I learned to swim in pre-school and fell in love with the water, but I was terrified of competition so I stayed away from it until age 7.

The VOICE: Who encouraged you to swim?

The VOICE: Do your parents encourage you by supporting you at the various events?

Naekeisha: Yes, my parents are my biggest cheerleaders; in fact, they find the time to travel overseas with me as well.

The VOICE: Is anyone else in your family involved in swimming?

The VOICE: What other sports have you participated in?

Naekeisha: Track and field and volleyball, which I still participate in. At present, I represent SJC Blue Eagles.

The VOICE: What is your biggest accomplishment in your sport?

Naekeisha: When the announcement was made that I captured the Junior Outstanding Athlete of the Year at St. Joseph’s Convent and medalled at OECS 2016 and Goodwill 2017 swim championships.

The VOICE: Your favourite local swimmers, regional and international?

The VOICE: Who are your sports heroes and what do you admire most about them?

Naekeisha: I don’t have any sports heroes, but I admire people who persevere no matter what the odds.

The VOICE: What is your favourite event, and why?

Naekeisha: The 50-metre butterfly because butterfly is my favourite stroke and I like sprints.

The VOICE: How do you prepare for a championship?

The VOICE: How many times have you represented your club/Saint Lucia?

Naekeisha: I have represented my club at all local and most regional meets and Saint Lucia on six occasions.

The VOICE: When was the first time you represented Saint Lucia and when was the last time and in which country and championship and how was your performance?

The VOICE: How many championship have you won?

Naekeisha: I have not won any championships but I have placed second in many local championships, most recently in the Capri Sun meet.

The VOICE: How far would you like to go in representing Saint Lucia in swimming?

Naekeisha: For sure, at the upcoming OECS championship next month, the Carifta Swim Championship 2018 and FINA Worlds.

The VOICE: What do you think are keys to your success?

Naekeisha: Certainly hard work, perseverance, a competitive spirit and determination to go all the way.

The VOICE: From where do you draw your inspiration?

Naekeisha: From God; He strengthens me and my family.

The VOICE: What is your favourite meal/drink?

Naekeisha: All foods, but my weakness is chocolate

The VOICE: What do you do during your spare time?

The VOICE: Do you have a saying or a motto you live by?

Naekeisha: It’s pretty straight forward — everything happens for a reason and that’s okay!

The VOICE: What words of advice or encouragement do you have to share with other athletes at the RHAC?

Naekeisha: Remember to never give up on your dreams and never let anyone tell you that you cannot do anything. Never think that you cannot. Perseverance, determination and hard work always pay off.

Naekeisha: I would encourage people to learn how to swim. Even if you do not compete, it is a great form of exercise and we are surrounded by water, so it’s important for safety.