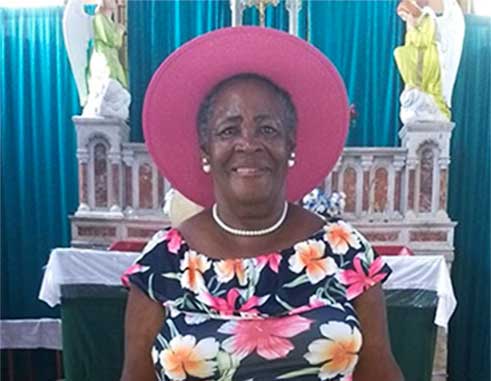 IT can be said by many that our world has developed a tendency of celebrating the life and achievements of many influential persons only after they have left this earthly world. However, the Choiseul Cooperative Credit Union Ltd. (CCCUL) operates within the philosophy that people should be honoured and celebrated while alive and in this vein ensures that annually an individual who has impacted the community of Choiseul is honoured by the institution.

At a ceremony held last Sunday at the Roman Catholic Church, Mrs. Marcia Imogene Mitchel was recognized and appreciated for her contribution to community life in Choiseul. Representatives from the National Workers Union, Choiseul Village Council, Health Aides and other community members said thank-you to her for her dedicated service to the community of Choiseul.

Marcia Imogene Mitchel (nee’ Gabriel) was born on June 6, 1945 in the District of Laborie but after completing her infant education moved on to reside in the community of Dugard, where she completed the rest of her primary school education.

After leaving school, she took up her first employment post at the Dugard Combined School, where she served as a teacher in January 1959. Imogene later sought employment at Pac Estate Saint Lucia Ltd. as an accounts clerk but did not stay in this position for too long, moving on to becoming a Nutrition Aide, stationed at the Mongouge Health Centre, with a focus primarily on stamping out malnutrition.

She worked in this post for three years and in 1979 was transferred to the La Fargue Health Centre, where she worked with the community Health Aide programme. During her tenure, she did her utmost best to ensure that every child was immunized.

Mitchel was very instrumental in the advancement of the communities of Roblot and Lamaze as she assisted in helping people receive pipeborne water. In addition, she worked assiduously towards the construction of a bus shelter at the Lamaze gap. This lady of many talents has also been attached to the Blind Welfare Association and has participated in many programmes, including a rehabilitation of the blind in Jamaica. Her tenacity for community development is undeniable and this led to her assisting in the establishment of the Club 60 programme, as well as being a great advocate for people with disabilities within the community, a passion which was fueled from the challenges which she experienced with her own son.

She also wore the hat of a trade unionist as she was an advocate for workers rights. She worked with the National Workers Union and due to her outstanding performance in her field, the union selected Mitchel to pursue academic studies on trade unionism in Brussels.

Her caring nature was always recognized and it was in this vein that she was appointed as the manager of the senior citizens home at Malgretoute, Soufriere. Throughout her three-year tenure, she was highly praised by Government and private officials, especially the late Health Minister, Romanus Lansiquot.

During that time, she was instrumental in instituting many positive changes within the establishment and propelled the move to provide paupers with affordable burials through the funeral homes instead of placing them in cargo boxes for burial.

In March 1991, Mitchel was appointed District Registrar, replacing Mrs. Hilda Rosemund. Her duties as registrar included recording birth and deaths, the registration of persons born out of wedlock, and affirming weddings authorized by the Attorney General. By 1997, she was given another appointment, this time as a Justice of the Peace (JP).

For twenty years of her life, Mitchel faithfully served on various posts on the Choiseul Village Council, serving as Chairperson from 1997-2002.

In 1998, a group of strong and intelligent women which, of course, included Mitchel, formed the Popular Theatre Group under the theme, “La Vie La Terre.” This was done in observance of International Women’s Day. It involved the empowerment of women in the community.

Mitchel fondly remembers one of their presentations in Soufriere where the late and former Prime Minister of Saint Lucia, Sir John George Melvin Compton, was thoroughly impressed. She has to this day continued to be an advocate for women’s rights.

Culminating all those adventurous years, Mitchel is now a farmer and is constantly seen on Saturday mornings at the village market selling her produce. Her humble nature is truly admirable after attaining all those accolades.

Mitchel left some advice to people desirous of serving their community or working within the social sphere. She left the gathering with her five BE’s which, she says, travelled with her throughout her life and still do. BE Honest, BE Transparent, BE Compassionate, BE Committed and BE Discreet.