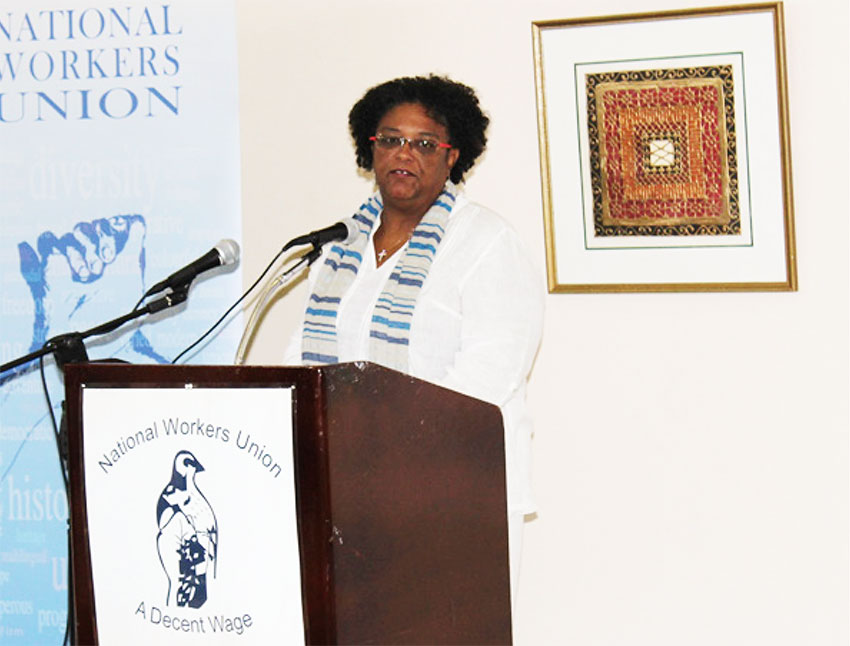 BARBADOS’ Opposition Leader, Mia Mottley, says bold and strategic leadership is what Caribbean islands are in need of right now, not just in government but at the level of churches, unions and private sector.

She said the task facing Caribbean people in redefining their concept of development in this decade has to be embraced by not just political leaders, but by all leaders within the society if the redefinition is to become real.

Her message was directed not solely to delegates of the NWU but to trade unions nationwide, reminding them that while much has been achieved, in terms of the preservation and enhancement of the rights of workers, much still remains to be done.

Mottley reminded trade unions of persistent pockets of inter-generational poverty that still exist in communities across the region and the need for them not to sit on their achievements.

“(There are) the challenges of a stagnant jobs market and the changing nature of the world of work, whether as a result of automation or artificial intelligence. Unions, therefore, are well aware of the need for constant vigilance to ensure that these gains made are not lost and that new opportunities for growth and development are sought out and exploited,” she said.

Caribbean people, she said, are presented with a unique opportunity to embrace new thinking, to construct a new development paradigm and to shape it to their advantage, adding that, “We simply have no choice.”

Mottley asked delegates whether it was sufficient for the region to follow a development model that only allows its people to focus on educating enough of themselves to keep their respective countries stable, or do they agree that they must pursue a development model that maximizes the opportunities that every citizen of the region can benefit from through education and economic enfranchisement to make them global citizens rooted in Caribbean values.

Noting that collectively Caribbean people have the education, tenacity and courage to take greater control of their destiny, Mottley indicated that bold and strategic leadership is what’s missing in that context.

The Barbados Labour Party political leader noted the difference that can be achieved when Caribbean governments, organizations and people in general work together for a common purpose.

“I saw this first-hand as I cheered for the region’s creation of a single domestic space, the freedom of movement of our people, the enhancement of our security. If we could do it for Cricket World Cup, we can do it for ourselves,” she said.

With regards to the economic prospects faced by Caribbean countries, Mottley said they are daunting and call for a radical re-thinking of the region’s past assumptions and a fundamental restructuring of its economies.

According to her, division and fragmentation at this critical time can only serve to stymie the region’s chance of progress.

“We have enough battles, not of our own making, to add to the ones that are there. It is, therefore, vital that our leaders and our people both accept that we will always be stronger together but the platforms to facilitate us coming together have to be added,” she said.

It is in that light and for better movement of people and labour and trade within the region that she spoke on the high cost associated to travel within the region, calling on leaders to tackle this issue once and for all.

“The notion of not confronting the ridiculous prices of the freedom of movement and travel within the Caribbean is beyond my understanding,” Mottley said.

According to her, it simply cannot be that moving from Union Island to St. Vincent costs EC$110 but from St. Vincent to St. Lucia costs over EC$1,000.

“To move from Barbados to Bequia is EC$1,500 for a journey that is 100 miles. We have a duty to our people in the region to get this matter of travel corrected,” Mottley said.

“Mine will be a voice that will continue to speak to these issues like a broken record,” she added.

Mottley, a committed regionalist through her own admission who believes the only way forward for Caribbean islands is regionalism, questioned the role of the trade union movement in the next phase of Caribbean development.

“How do you contribute to the effort while not distracted by your central mission?” she questioned.

She said that to strategize for the future it is vital to first contextualize from the past because it is always important to note that too many people do not understand the journey that was taken to get the region to this point.