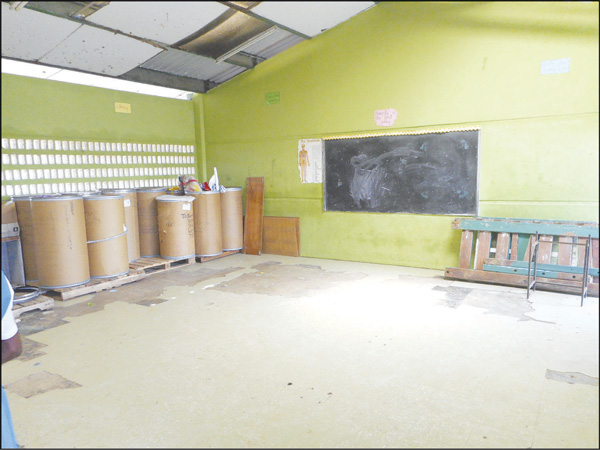 THE deplorable condition of the Vieux Fort Primary School is affecting its operations and may lead to protest action by parents of students of the school.

An entire block at the school which houses five class rooms is without electricity, its roof is leaking with galvanized sheets constantly falling, and the school’s toilet is without a door.

The school has a population of well over 200 students.

In an interview with this reporter, principal of the school, Francis Moonie, said they have been experiencing such problems for more than a year and the situation has become unbearable.

“Students get wet in their classes whenever it rains. Right now, we have to make certain classes larger to accommodate those students who were displaced because of the condition of one of the blocks at the school,” he lamented.

Yesterday, a section of a classroom in the block was transformed into a shallow swimming pool due to rain.

Moonie said the Ministry of Education is aware of the problem, adding that the school officials have shown the Ministry pictures of the condition of the building, but so far nothing has been done to remedy it.

He said the teachers have discussed the matter and will be informing the St. Lucia Teachers’ Union (SLTU) of their concerns because they are unable to continue working under such conditions.

As it relates to the parents, Moonie said they are no longer prepared to keep their children under such conditions and are prepared to do something about it.

“The parents are the ones who are agitating for something to be done about the problem. It is likely that they will take some form of protest action,” he said.

According to Moonie, as a school, the facility is not the most conducive environment for students to work under.

“Something has to be done to provide a more conducive environment for the students,” he said.