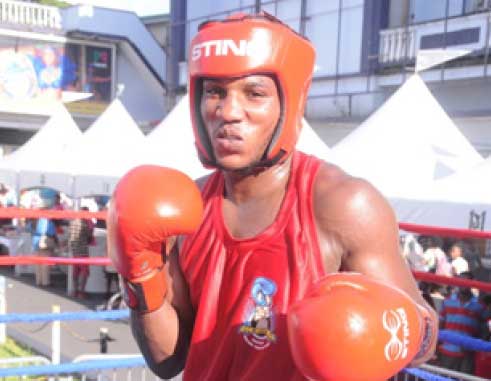 WITH Saint Lucia set to host the Caribbean Boxing Championship scheduled for the Beausejour Indoor Practice Facility in December, UK-based boxer, Jacob Gabriel, is fascinated about the country and keen on winning loads of medals for Saint Lucia.

Merely hours before this interview with The VOICE, he received his Saint Lucian passport and now earns the right to represent the country.

Gabriel told The VOICE recently that his father is Saint Lucian while his mother is Jamaican; both currently live in the UK.

“My association with the Saint Lucia Boxing Association came about three years ago when I came to see my grandmother in Vieux Fort and while on island I sparred with a few boxers at the Vigie Gym and I was really impressed,” he said.

“I have a relaxed style and England never liked it, even though I beat people on the England team,” he said. “I have had 86 amateur fights, with over 60 wins, but my goal is to win medals and eventually turn professional at some point in my career.”

When asked what fascinated him about representing Saint Lucia, his reply was, “The training is harder in Saint Lucia because it is done in the heat. I will be fitter and I like it as much as I love the food.”

Head Coach for the Saint Lucia boxing team, Conrad Frederick, said, “Jacob is a very good fighter. I haven’t seen him work too much but three years ago, he was in Saint Lucia and did some work with me along with Lyndell Marcellin, Arthur Langellier and Marvin Anthony. He is back on island and his travelling documents are in order and that gives him an opportunity to represent Saint Lucia at the Commonwealth Games in Australia next year.”

Frederick added: “He did some work with Marcellin and I was really impressed. He fired a lot of body shots, counter-shots and his moves are simply eye-catching. Some of the shots he uses I have not seen them used by our local boxers as yet. He has a slight Floyd Mayweather style, uses a lot of body punches, and that’s what weakens boxers. A head shot will get you dazed, but a body punch will cut you down and that’s the weapon he has.”

However, Frederick hastily added: “I hope what I am seeing right now, I will see it in the ring and at the right time. Gabriel looks like a shining light for Saint Lucia. It looks like we have a medal where he is concerned — and also Nathan Ferrari.”

Presently, the two boxers weigh in at 64 kg and Coach Frederick’s task is to take Gabriel down to 60 kg and allow Ferrari to do battle in the 64 kg.

Presently, the two boxers weigh in at 64 kg and Coach Frederick’s task is to take Gabriel down to 60 kg and allow Ferrari to do battle in the 64 kg.