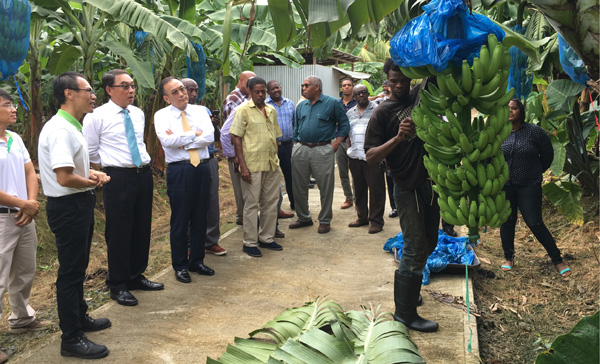 Deputy Permanent Secretary in the Ministry of Agriculture (Saint Lucia), Augustin Cadette, on behalf of the Ministry, welcomed the delegation and expressed gratitude to the government and people of Taiwan for their contribution in assisting the development of agriculture of Saint Lucia.

Cadette emphasized that banana is one of the most important economy crops in the island and that the Ministry looks forward to continued cooperation with the government of Taiwan to further increase the productivity and quality of local bananas.

After the meeting, Liu visited the local banana farmers at Crown Lands to see the banana harvesting and packing process. He also spoke with local farmers, sampled some bananas and praised its unique and delicious flavour.

The new bilateral banana project will be executed over a four-year period and cost nearly US$5 million. During the first year, the major focus shall be on restoring the industry to pre-Hurricane Matthew condition and increasing productivity on the existing acreages.