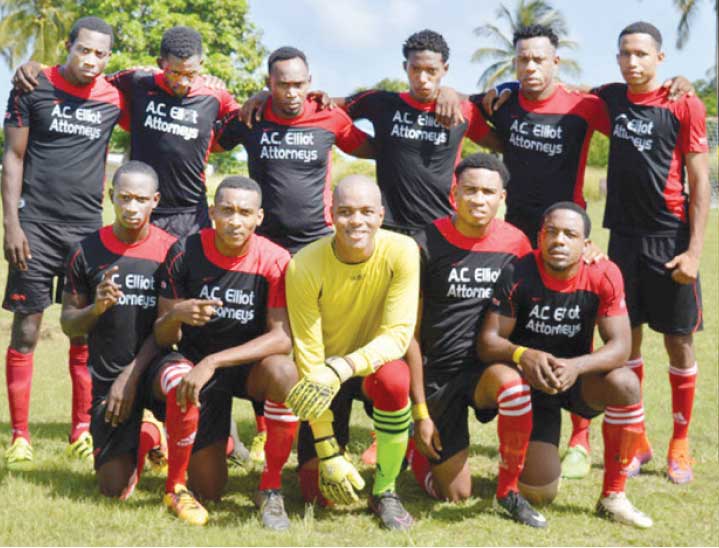 THE much-anticipated 15th edition of the Blackheart Production Knockout Football Tournament, being hosted in collaboration with the Saint Football Association, is scheduled to start on September 16 at the Phillip Marcellin Ground in Vieux Fort. According to the media power rankings, however, the picks are varied.

Most notably is the fact that two-time champions Micoud and defending champions Vieux Fort South feature on every list presented by the four media personalities.

David Pascal of the Star Publishing Company has three-time champions Dennery as the team most likely to win this year’s tournament.

“Dennery had a decent showing last weekend at the Phillip Marcellin Ground as they made it to the semifinal round of the Champion of Champions tournament,” Pascal said.

Dennery has an outstanding young custodian, JohnadBiscette, and with the experienced national defender, SabbatusHunte as captain, Damian Edward in defense and prolific striker, RidelStanislas, they certainly have a winning chance this year.

“It’s never easy to select teams you believe will win a championship ahead of a draw,” De Beauville said. “We are a small island and one has the chance to see the various teams and individual players in action on any given day. The five teams mentioned have been consistent and when the draw is made next Wednesday, maybe three of the five teams mentioned can be in the same group.”

Vieux Fort South has to date been the best attacking team on island and has a blend of both experienced and youth players. One can expect to see former national player and captain, Jamil Joseph, marshal his troops to another championship victory. Joseph will have the likes of youth players Noah Nicholas, Leon Alexander (goalkeeper), Antonius Mayers, Antonio Joseph and SarnSavery on his side.

Former champions Micoud will have a point to prove as they attempt to regain the championship they lost to VFS last year. One thing for sure, they will have to depend heavily on the safe pair of hands of former national goalkeeper Noah Didier and strikers Levi Altidore and Salim Joseph.

Babonneau has been one of the busiest teams. The players have improved immensely and are quick on and off the ball, a basic drill that is lacking in local football. Once they strike the right momentum on the day, they can create tons of problems for the opposition.

Canaries, who have won the Blackheart Championship before and, most recently, the Vizions Super League, are without a proper playing facility. However, their strength comes from their perseverance to prove to the powers-that-be that their determination to win this year’s tournament is high on their agenda.

Coach Dominic Leonty has clearly stated that despite not having a playing facility, his squad will produce the best brand of football Saint Lucians have seen in a very long time. The likes of David Henry and Bradley Tisson are the ones to watch.

Mabouya Valley, three-time champions, are expected to come out firing as prolific striker Vernon Abbott will lead the charge.

Glasgow said, “My power rankings were chosen solely in terms of last year’s performances. Vieux Fort South are the defending champions and since last year, they keep on improving. Based on viewing them during practice and friendly matches, and keeping in mind they just completed the Vieux Fort South League, they are all set and rearing to go and back it up with a number of youth players.”

He noted that Marchand just completed their league this past weekend and have that hidden factor because they are still spurred on by last year’s performances for making it for the first time into the final stage of the competition. Credit must be given to the likes of Andrus Remy, Valdez Maximin and Travis Joseph for their perseverance.

In the case of Gros Islet, a number of football pundits have a question mark as to why the northern team is even in the power rankings. But because of their bounce-back ability, they have strikers up front who can score goals as much as they concede and sometimes you really need those extra goals in a knockout tournament to push you over the line. The likes of Aremis Lorde, Elijah Louis, Troy Greenidge and Nicholas Lawrence will turn on the heat.

“Vieux Fort South and Canaries have the most complete teams — from goalkeeper to striker,” he said. “Micoud have in their armour goalkeeper Noah Didier, experienced midfielders Levi Altidore and Shane Paul.”

Babonneau, he said, are very hungry and very determined. Captain and goalkeeper Alex Joseph is expected to lead from the back. Nemiah Wilfred, a complete midfield player, along with Trisan Pierre and Kissinger Anthony, are just some of the key players expected to turn on the heat.

Dennery, based on how they played at the Champion of Champions at the weekend, if they can keep that form and execute their attacks, they can sure to beat their opponents heading to the finals with the likes of Renel and RidelStanislas in their squad.