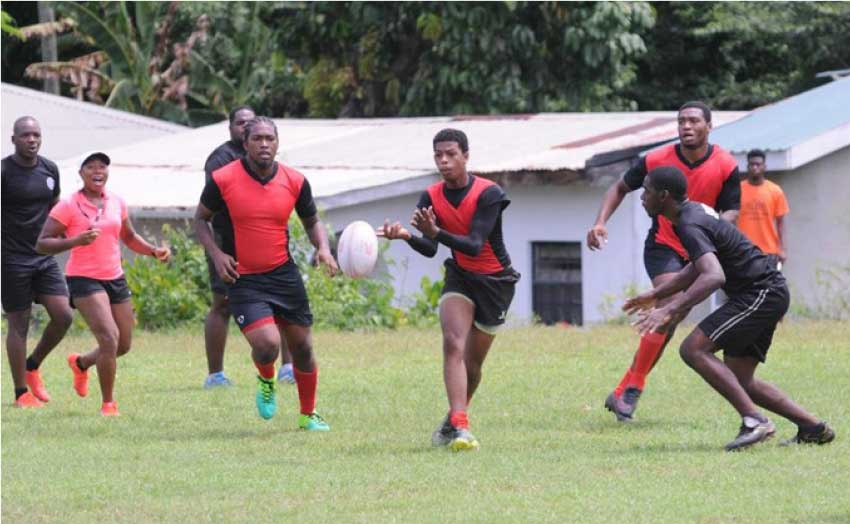 THE curtains came down on this year’s tremendously successful Community 7s Rugby Tournament with the final held on Saturday at La Clery playing field.

While there were obvious indications of who would take home the trophy in the male division, it was down to the wire when it came to the female squads of Whiptail Warriors Rugby Football Club and VBCC Stingers.

After losing two rescheduled matches on Wednesday evening in Gros Islet, the ladies of VBCC Stingers put themselves at risk of losing it all after winning 4 consecutive matches in the first and second legs of the tournament.

In their first match-up in the finals, Stingers’ hype off the field did not transfer on the field. The Warriors’ impressive quick reactions surpassed the lagging responses from Stingers. Newcomer Nadine Stephens scored the first try for the Warriors followed by a try from winger, Mary Roberts. Conversions for both tries were cleared by Chantel John. No comeback from their opponent: 12-0.

Warriors rightfully celebrated the big win as they were a step closer to being this year’s champs. With more pressure on their shoulders, Stingers were panicky in the first half of the last match. A penalty try was awarded to Warrior Mary Roberts in the first two minutes of the game after she received a high tackle as she ran past the line to score a try.

The Warriors’ defense line became almost impenetrable for Stingers until Shena St. Mark finally broke through at the 20-metre mark to put down the first try of the day for Stingers. The team finally clicked on. The defenders upped their game, blocking several attempts from the Warriors. Ashley Nelson of Stingers palmed her way through Warriors’ defenders to secure the second try for her team with Kameka President scoring the conversion. The game ended 12-7 in favour of the 2017 Community 7s Female Champs VBCC Stingers.

In the male division, Rogues RFC continued their winning streak for the season, taking home the 2017 Community 7s trophy. The undefeated team defeated Whiptail Warriors 31-0 with Ervin Joseph scoring 3 of the team’s 5 tries.

There was also some great effort from Warrior Tyrese Samuels for carrying his team in this match. He scored a try and two conversions in the Warriors’ match against Stingers, who won by just a conversion — 21-19.

The last game of the tournament between Rogues RFC and VBCC Stingers left such a palatable taste for rugby. Both teams showcased some remarkable plays that made a few spectators sign up to give rugby a go. The final score of the match was 28-12 in favour of Rogues with Ervin Joseph once again contributing significantly to his team, scoring 2 of their 4 tries.

Top scorers of the day were Mary Roberts of Whiptail Warriors for the females and Ervin Joseph of Rogues RFC for the males.

Meanwhile, the Saint Lucia Rugby Football Union (SLRFU) was pleased with the turnout at the tournament. The Union is grateful for the participation of the local rugby clubs and also to individuals and groups who made the staging of the tournament possible.

The next step for SLRFU is mobilization of national training where male and female squads will be selected to represent Saint Lucia in a prominent regional tournament slated for later this year.