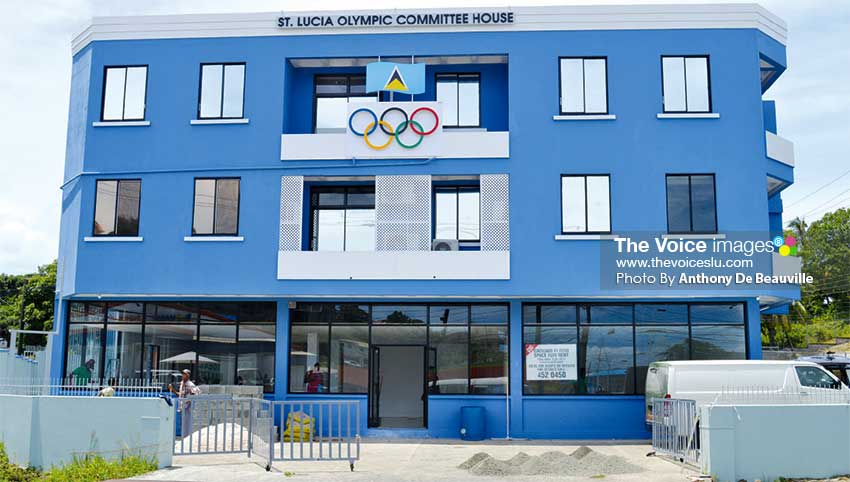 WHEN the Saint Lucia Olympic Committee Incorporated (SLOC Inc.) commissions its new Headquarters tomorrow, the Organisation would have realized a vision conceptualised over two decades ago.

The premises, located along the Vide Bouteille Highway and the La Clery junction, was purchased in April 2016 and affords the SLOC Inc. a more convenient base to conduct its business and cater to the needs of member federations that make up the organisation.

“The Committee is the umbrella body for 20 national sports organisations. It’s like a mother to these entities and we are happy to offer them a home, a place where they can come to and assemble and manage their activities. It will instill a measure of professionalism in the administration of sport in Saint Lucia,” President of SLOC Inc., Fortuna Belrose, said.

Added Belrose, “We have been talking about a building for over 20 years. You have to lead by example and move away from managing ‘from the trunk of cars’. Associations will have an address to call their own.”

“That is a principal and major initiative of the 2020 agenda of current IOC President, Thomas Bach,” Belrose noted.

International Olympic Committee member resident in Saint Lucia and immediate past president of SLOC Inc., Richard Peterkin, was at the helm of the Organisation during the years when the quest for a home of the SLOC Inc. was first mooted.

“It’s an issue of pride that you have something you can call your own and your home. Better amenities and resources for affiliates help us to do our job more efficiently. It’s an opportunity for them to have offices and space from where they can operate,” said Peterkin.

He stressed that at the start of the journey towards this initiative, funds were limited and the organisation had to “scrape for money”, except for project funds from Olympic Solidarity. He noted, however, that by the early 2000s additional resources were received from the Pan American Sports organisation (PASO) to start saving for a new building. Peterkin was also upbeat about the numerous possibilities having such premises can provide for the SLOC Inc. and its members.

“It should be noted that while the SLOC Inc. was able to make some savings, it was not to the detriment of our affiliates or the athletes who represented us at Games as we were able to fund programmes and athlete preparation from both Olympic Solidarity and PASO to the extent necessary,” he emphasised.

“The new premises will allow us to have video conferencing for training and communications remotely. People will not have to fly in. We spend so much money on travel and hotel accommodation. We can strengthen the Secretariat with more projects and programmes and things like that,” he added.

The Executive Board of the SLOC Inc. has disclosed that approximately EC$2.3 million have gone into the new building project, including the cost of the purchase, repairs and renovations to date. Major funding agencies have been PASO, IOC and the SLOC Inc., which have been having their own savings over the past two decades.

The premises will provide meeting space, conference and training facilities, museum and education centre, offices for member federations, a library, and the ground floor will be available for rent.

The Saint Lucia Olympic Committee was launched on January 22, 1987 and became a full-fledged member of the Olympic family on September 24, 1993. The Organisation received its documents of Incorporation in 2016 which facilitated the purchase of the building.