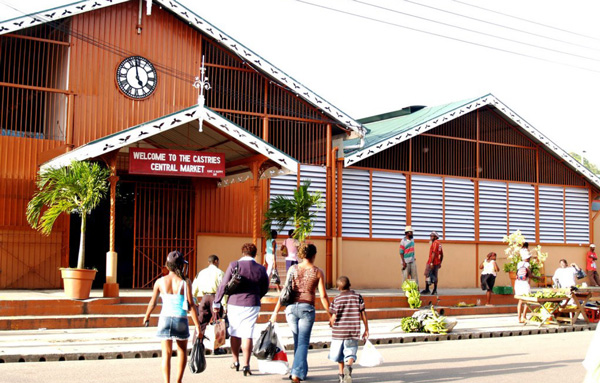 CASTRIES Mayor, Peterson Francis, has endorsed the extensive and impressive plans by the government of Saint Lucia to upgrade and modernize the Castries Market.

Prime Minister and Minister of Finance, Allen Chastanet, along with Francis and representatives from the Ministry of Planning and Saint Lucia Trade Export Promotion Agency (TEPA) took a tour of the market last week Saturday, during which time they discussed various ways to improve the area for the comfort of vendors and shoppers.

The tour, which took officials through the Vendors’ Arcade, and the Craft, Food, Provisions and Fish Markets, was part of plans to enhance the facility and the general image of the city.

In the coming weeks, members of the public will see the transformation through a reinvigorated design and structure which will include new ultra-modern re-modelling, bandstand to accommodate regular entertainment, proper ventilation, and a food court.

Speaking to the plans, Chastanet stated: “The idea is to raise the standard and quality of vending.”

Referencing one of the most successful markets – Borough Market in London – the Prime Minister Chastanet said he hopes to emulate some of its features, such as cooking stalls, cottage industries and bars.

“It is all part of the beginning of plans to redevelop the City of Castries,” Chastanet said.

In his endorsement remarks, Francis said the blueprint calls for the modernization and reengineering of vending in Castries.

“We are trying to get all stakeholders involved and I wish for solely Saint Lucian products to be sold in the Castries Market. It’s an exciting time because obviously there’s a lot of work that needs to be done, a lot of conversation that needs to be had, but we’re eager to get started,” said Francis.

The plan and design for the Castries Market are already being pencilled by the architects and will soon be completed and presented to the public.