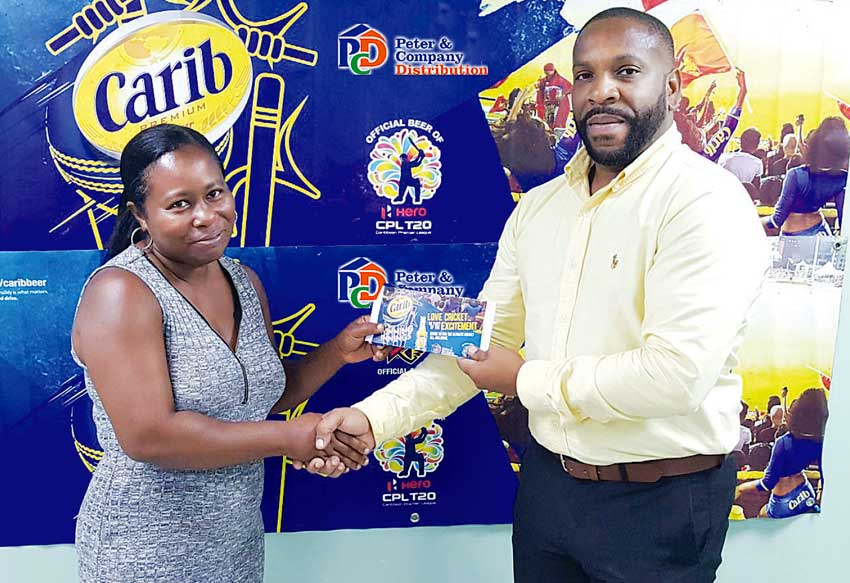 PRESS RELEASE – A lucky winner from Saint Lucia will be among the thousands of cricket fans from across the Caribbean attending Saturday’s finals of the Caribbean Premier League T20 (CPLT20) in Trinidad & Tobago, thanks to Carib Beer and its Saint Lucian distributor, Peter & Company Distribution (PCD).

Carib Beer is the official beer of the CPL T20 and during this year’s season of the popular franchise, Carib gave Saint Lucians several opportunities to win prizes during the matches as well as at various bars and retail outlets. The main promotion, however, was Carib Beer’s “Winning Innings” whereby with every purchase of a six-pack of Carib Beer, customers had the opportunity to enter for the grand prize of an all-expense paid trip to Trinidad & Tobago for the finals of the 2017 CPL T20 on Saturday, September 9.

Last Monday, the draw took place at Peter & Company Distribution and the lucky name pulled out of a box containing thousands of others was that of Genifer Madsen.

Madsen will be accompanied by someone of her choice on this all-expense paid prize trip for two to Trinidad & Tobago. Her prize includes airline tickets, ground transfers, hotel accommodation, meals and tickets to the Brian Lara Stadium, where she will join other Carib winners and fans all coming together to enjoy the game as only a Carib Posse can.

As the official beer of the tournament, the team at Carib Beer worked tirelessly with CPL T20 personnel this summer to deliver outstanding fan-centered events around the various stadia. In Saint Lucia, it was no different, with the Carib team and fans igniting the stands with their energy and fervour matched by Carib paraphernalia.

According to Germaine Serieux, Brand Manager for Carib Beer at PCD, “This year, we went all out to engage the fans at the games adding to the excitement, colour and party-charged carnival atmosphere. For that, we really want to thank the fans who supported us and all those who took part in the various promotions.”

Serieux said Carib is passionate about this partnership and as the number one beer in the Caribbean with strong affinity to cricket and carnival, it was easy to bring both worlds together to celebrate this year’s season of CPL T20, which is dubbed “The Biggest Party in Sports”.

The final of the CPL T20 is being played between St. Kitts and Nevis Patriots and Trinbago Knight Riders.