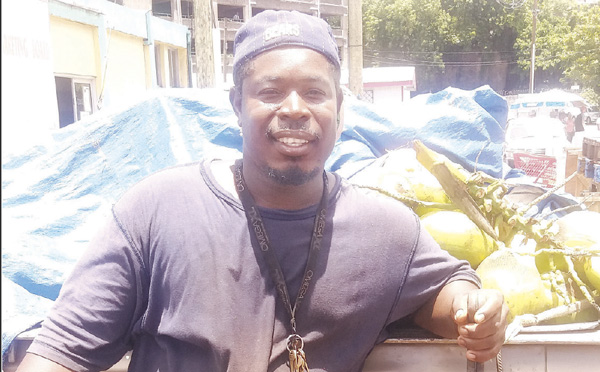 ONE of the many perks of living on a tropical island is that you have an abundance of this wonderful fruit called the coconut and you get to enjoy everything that it has to offer: from oil to water.

The VOICE decided to speak to one very popular vendor of this healthy and delicious drink to find out just what it takes to do what he does and just how lucrative is his job selling one of the most popular fruits.

Elizah Louis, upon approach, has the look and persona for his profession because with his calm demeanour and charming smile, who would want to go to the other guys?

Plus, it is also a good sign that he’s doing something right, as his spot is always teeming with customers while his neighbouring competitors are, let’s just say, not as popular.

When asked about his success, the 30-year-old resident of Marc said he simply loves what he does. Here is what else he had to say.

The VOICE: How long have you been involved in coconut vending?
Louis: I’d say it’s approximately 15 years now.

The VOICE: How did you get into this business?
Louis: I started with my father. He started selling from the time I was in school and I joined the business with him after I left school.

The VOICE: What is a typical day like for you?
Louis: Basically, we start off early in the morning by loading the coconuts onto the truck, driving down to the market, offload it onto this other truck and start chopping them up and bottling the water for the customers. We are on our feet for the whole day and sometimes we barely get five minutes for lunch or to even go to the toilet. We’re on the go for the whole day until 7:00 p.m. After that, we clean up our spot, load the coconut shells onto the first truck, take them down to the Deglos landfill and that’s our day. Sometimes you get some rough days and sometimes there are good ones. We get lots of customers from the cruise ships and lots of locals as well, especially when the tourist season is open.

The VOICE: People might look down on this profession and think it’s maléwé work, when in fact, you guys make a pretty decent living. So just how lucrative is this business?
Louis: Oh, yeah! As long as you put your heart in it, it will be profitable. If you just look at it and you’re not into it, you will never understand.

The VOICE: Going on what you said about putting your heart into the job, there are some people whom you can clearly see are only in it for the money and spoil the profession for guys like you. What do you have to say about these individuals?
Louis: For a long time, I’ve been speaking to the Mayor and other people in authority about this because I feel if everybody has their own station like, say, the regular guys, and those who are not regular can be placed on another side, then we will be looked at differently. But, right now, everyone is together, so they spoil the chances for us. But if we have our side and the non-regulars have their side, things will flow a lot better and customers can make better choices to know who they’re going to. Also, I think the City Council Police should patrol the area regularly to make sure that when the guys are finished, their vending area is clean before they can leave.

The VOICE: From where do you guys get your supplies?
Louis: I go as far as Micoud and Roseau Valley and we buy them and bring them to Castries.

The VOICE: One bad aspect of this job is the issue of Leptospirosis (a deadly vector-borne disease which is spread through rodent urine). Do you take appropriate precautions where your product is concerned?
Louis: After leaving the farms to come to Castries, we make sure that we wash the coconuts and, for extra precaution, when the customers ask us to cut the coconut spoons to eat the jelly, we ask them to wash the spoons first.

The VOICE: In the north, particularly in Rodney Bay, you see vendors running around, darting through traffic trying to make sales. What do you think of this method?
Louis: Basically, the kind of work we do, it’s a hustle, so I expect that. But at the same time, I don’t like the way they run across the roads, but it’s a hustle. You have to go after the customers for you to get maximum sales for the day and also for you to have an upper hand on your competitors. Sometimes you ask them and they say they don’t want any, but then you talk to them and you tell them about the benefits of the fruit, they change their minds and buy some.

The VOICE: Okay, then tell me about this fruit. What is it about coconut water that makes it so popular?
Louis: Health-wise, it has many benefits, and then on the other hand, it tastes really good and refreshing (laughs).

The VOICE: For how long do you see yourself doing this?
Louis: I can continue as long as I’m alive. Also, I can tell my siblings to join as well.