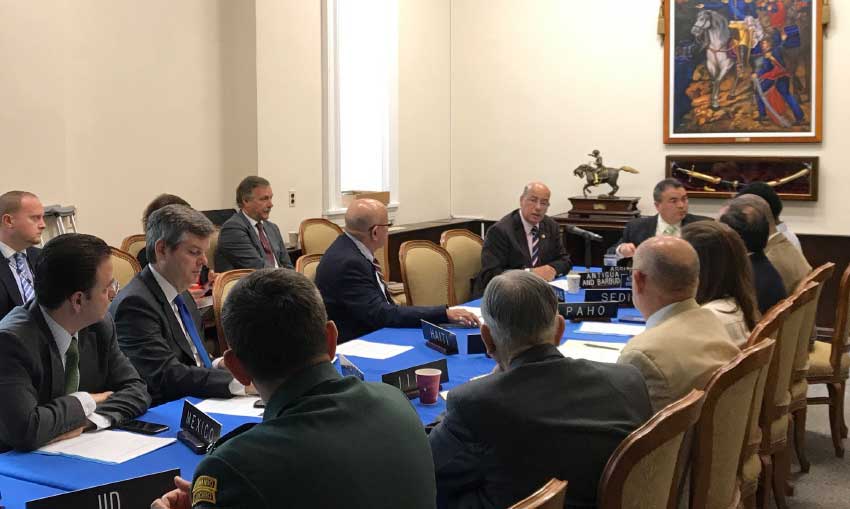 PRESS RELEASE – ANTIGUA and Barbuda’s Ambassador to the United States and the Organisation of American States (OAS), Sir Ronald Sanders, on Wednesday morning met the Inter-American Emergency Aid Committee and representatives of major countries to discuss the impact on Barbuda of Hurricane Irma.

The meetings took place in Washington D.C. at the headquarters of the OAS.

The Ambassador made emotive presentations to the representatives of both groups who were visibly moved by a video presentation of the destruction of Barbuda and the evacuation of all its residents to Antigua.

Ambassador Sanders described the present situation in Barbuda as “uninhabitable”, including the possibility of disease resulting from dead animals and unclean water infiltration.

“It is very fortunate that Antigua had only relatively minor damage from Hurricane Irma and is now functioning normally with the result that it could take in the inhabitants of Barbuda and provide for them on an immediate basis,” he said.

“But,” the Ambassador said, “there is a natural desire by the Barbudan community to return to the island, something that is difficult until basic services can be restored.”

He stressed that even these basic services have a high cost that is beyond the resources of the Government of Antigua and Barbuda alone. He explained that the country has a US$1 billion economy but is facing a rebuilding cost of in excess of US$250 million.

Donor countries made the point that in order for Barbuda to face up to future storms of this kind, it would have to be rebuilt differently and to higher standards that could resist hurricanes. In agreeing with this observation, the Antigua and Barbuda Ambassador said: “This is precisely why the country requires international help.”

He said that Prime Minister, Gaston Browne, is already engaged regarding the need for a careful and well-documented plan for the rebuilding of Barbuda that is sustainable, viable and “bankable” to attract the necessary funding.

Many of the agencies, such as USAID and the Pan American Health Organisation, indicated that their emergency response teams are already sending in relief material to help cope with immediate needs.

Later in the day, Ambassador Sanders made a presentation to an audience of U.S. government officials and advisers and U.S. Congress persons and their staff at the Centre for Strategic and International Studies.

He declared: “It is vitally important to knock on every door, to speak to everyone, to spread knowledge. I am painfully aware that the devastation of Barbuda could become yesterday’s story to the international media. It is crucial to act now and at all levels.”