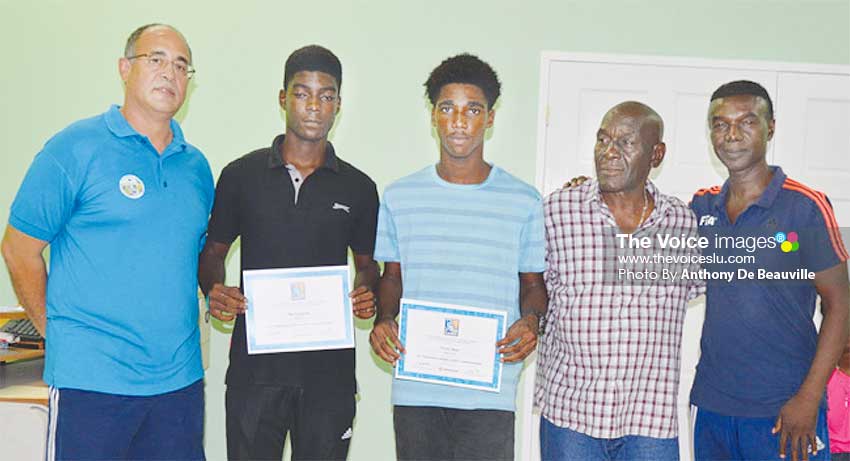 SAINT Lucia’s Under-15 football team returned home recently from Florida where they competed in the CONCACAF Under-15 tournament and failed to get to the second round of the tournament. However, the technical staff spoke highly of the team’s performance.

Last week Saturday, the entire team that traveled to Florida and a few parents assembled at the Saint Lucia Football Association headquarters in La Clery for a brief appreciation ceremony and to discuss the way forward for the young and aspiring footballers.

Team Manager, Vincent Boland, spoke to The VOICE about the tournament and plans the SLFA has in store for the players.

He said, “We are at a developmental stage. The boys adopted all the training strategies that we used. In terms of defense and positioning, we also realised the team’s weak areas and that is finishing. This is among our focus going forward.”

He added: “It was a first time at a tournament like this and there is a need for a little more focus, discipline and timing.”

Presently, the team is in a two-year developmental programme with eyes set on the CONCACAF Under-17 World Cup in 2019.

“They haven’t announced the date as yet for the qualifiers, but we expect it will kick off in the middle of 2018,” Boland said.

He told The VOICE, “The tournament also allowed the players to interact with their peers from Mexico, Costa Rica, USA, Canada and other teams from the region. We provided them with an insight of the way forward,” he added.

During the discourse, some of the parents shared a number of ideas, including hosting a fund raising programme to facilitate the continuation of the team’s preparation, as over $138,000 was spent to prepare the team which played a few matches in Barbados before traveling to Florida, with limited sponsorships.

While at the tournament, two of the boys were offered partial scholarships: Rio Longville and Joshua Boland.

“The overseas coaches wanted the two boys to start this term, but it was a bit of a rush because you still had to find the balance of the money which worked out to be about US$56,000. It is an expensive thing. We now know the programmes that are on offer and we will be well-prepared going forward.”