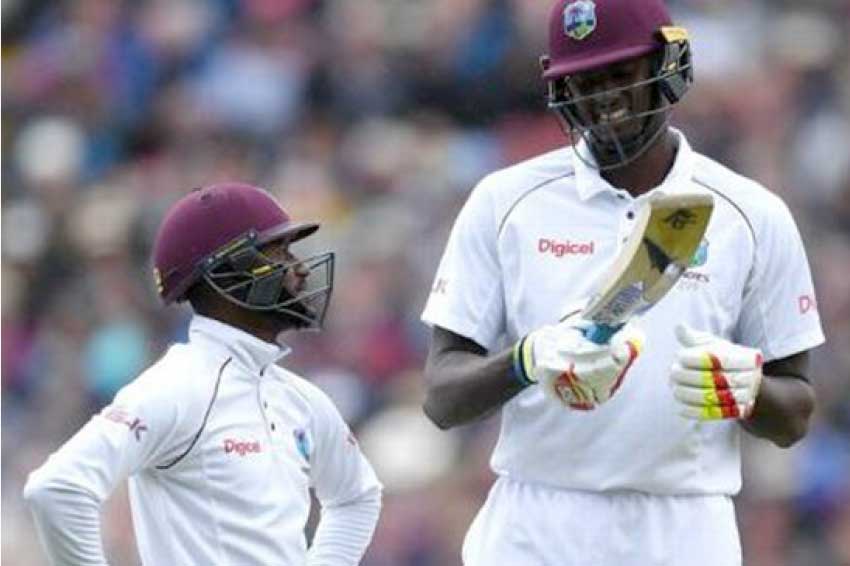 FAILING to run hard.Poking at wide ones. Not moving one’s feet. Hands in pockets as the ball is bowled. Not backing up. Not enough singles. Fielders too deep.Running down the middle of the wicket. No control over line. Playing across the line when it’s swinging. No diving to stop boundaries. Balls going through legs. Boundary balls served to order. Lifeless fielding.New ball not taken.Rash shots.Impatient bowling.Terrible techniques.Wasting the new ball.

If you had a list like this as a coach of a school team, you’d be angry. But this is not even a complete list of the mistakes the West Indies made in the first Investec Test.

Alastair Cook brought up his fifty with a misfield to cover. He brought up his hundred when the ball was hit straight to a point fielder who was either set too deep, or simply asleep. His 150 came from an overpitched ball on the pads. His 200 was guided away to the vacant third man … well not vacant in a cricket sense; there was a fielder there, Kyle Hope — he just didn’t stop the ball.

At the start of day two, West Indies committed three fielding errors before drinks that would have embarrassed a stressed-out mollusc. For most of the first innings, they looked about as interested in stopping runs as they were in penning love letters to donkeys. They wandered around the field like bored children, hands in pockets, no dives.

At one point, there was a misfield, and the ball wriggled out behind the fielder. And no one chased it. Not the player who had missed it. Not the other players around it. For a couple of seconds, a ball that had been delivered in a Test match was trickling out towards long on, and not one West Indian fielder was chasing it.

It’s always been the case that there isn’t enough first class cricket played in the Caribbean. But this situation is even worse than it seems because this team isn’t even particularly young.

Kyle Hope has played only 34 matches and while that makes him sound young, he isn’t; he’s 28. Mark Stoneman, two years older than Hope, has played 112 more first class matches and scored 17 more hundreds. Hope was picked to bat at No. 3, yet he had just one first class hundred coming into this series. Not the ideal hinterland for surviving English conditions and England’s two leading wicket-takers of all time.

There are only two players in this team under the age of 24; this isn’t a bunch of kids, this is a bunch of mid-20s cricketers who have neither experience nor decent records.

The bowlers were supposed to be the strength of this team. Sure, they lost Shannon Gabriel to fitness (and rhythm) concerns. But they still had a five-man attack apparently good enough that they could leave out DevendraBishoo.

And Kemar Roach aside, none of the bowlers did the job that they were supposed to do. Alzarri Joseph wasn’t quick, and he completely wasted the new ball on both occasions he was given it. Miguel Cummins was expected to come on as first change and keep the pressure up. He bowled horrendously to Joe Root at the start of his innings and their good start was ended right there.

Jason Holder’s role is to clog up an end, not clog up the opportunity to take a new pink ball under lights. And Roston Chase was supposed to give the seamers some extended breaks and work for the bowler at the other end; most of the time he seemed to struggle to land the ball within a metre of where he intended. (Getty/Cricinfo)