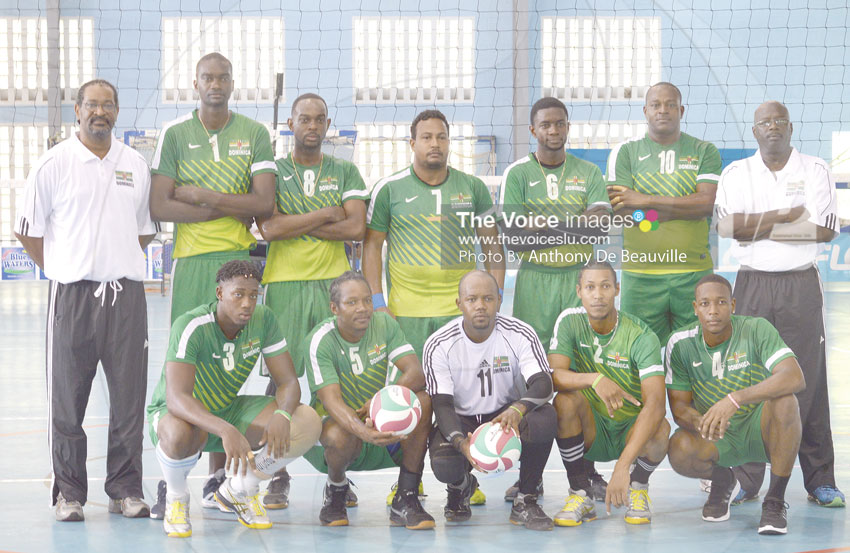 Share this post
THE 2018 NORCECA World Championships qualification Group E served off yesterday morning at the Beausejour Indoor Facility with wins for Dominica and St. Vincent and the Grenadines.

At the break going into the second set, the Dominicans regrouped as they changed their strategy, which paid off and they went on to level the match 1-1 with a score of 25-19. Despite winning sets three and four 25-20 and 25-21 and the match, the Dominica team was made to work hard by Antigua and Barbuda.

In game two, St. Vincent and the Grenadines left no stone unturned as they started their campaign with a win over St. Kitts and Nevis. The Vincentians won the first set 25-23 and went up 2-nil in the second with 26-24.

Going into the third set, the Kittitians’ die-hard attitude paid off as they came back to win the third set convincingly 25-14 to make it 2-1.

The fourth set was a ding dong battle between the two Saints as the pendulum shifted from one side to the other. But the Vincentians kept their nerves and looked a more determined team as they eventually won the set 30-28 and the game 3-1.

Last evening, St. Vincent and the Grenadines were slated to take on Dominica from 6:00 while Antigua and Barbuda were slated to play St. Kitts and Nevis at 8:00.

Matches continue this morning with Antigua and Barbuda playing St. Vincent and the Grenadines from 9:00 and St. Kitts and Nevis meeting Dominica at 11:00.

Meanwhile, President of the Eastern Caribbean Volleyball Association (ECVA), Glen Quinlan, spoke to The VOICE about the World Qualifiers and his expectation in terms of the level of play one expects to see on centre court.

Quinlan said, “This is a two-day tournament; the winner will represent the ECVA at the NORCECA Continental Championships in Colorado, Springs, U.S.A. We have Group D starting this weekend with host Saint Lucia playing French Saint Martin, Dutch Saint Maarten and Anguilla. The winner of that group will also represent the ECVA in Colorado, Springs, USA.”

He added: “This is the second round. Saint Lucia and Dominica got byes last year and the other teams came up the ranks placing first and second in their zones. The two winners will be crowned joint ECVA champions and also have a chance to progress in the rankings.”

In terms of the level of play, Quinlan said he expects it to improve, because “right now it’s sluggish”.