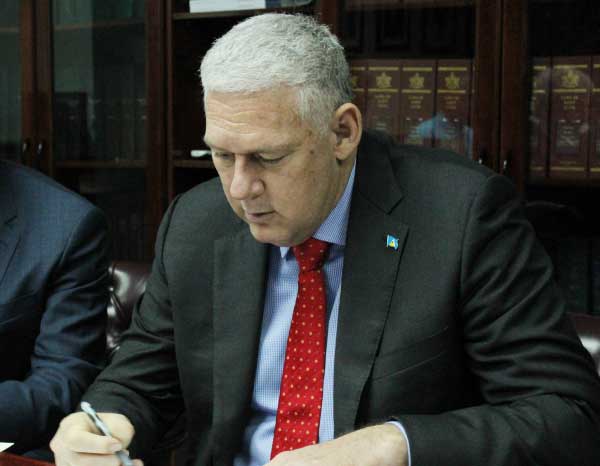 ST. LUCIA may impose visa restrictions on Venezuelans as that South American country battles economic and political crisis, for which no end seems to be in sight.

Prime Minister Allen Chastanet hinted at the measure to restrict the flow of Venezuelans into St. Lucia at a pre-Cabinet press briefing yesterday morning.

Stating that he remains deeply concerned about the security threat the situation in Venezuela poses to St. Lucia and the rest of the region, Chastanet opined that he has asked the Immigration Department to prepare a document for Cabinet’s consideration on visa restrictions.

“Barring any impediment, we will impose it (visa restrictions). But I certainly need to ask them to give me a background document to see what we will have to do to be able to impose visa restrictions on Venezuelans,” Chastanet said.

Months of protest action in Venezuela has left more than 120 people dead.

In an effort to restore calm in the country, President Nicolas Maduro, ordered an election to pick a 545-member Constituent Assembly with the power to amend the Constitution, something that has infuriated the opposition parties.

The country continues to sink further into economic depression, with food shortages worsening as well as inflation on food prices.

According to reports, the Venezuelan government is running out of cash with approximately $10.4 billion in foreign reserves left. It is estimated to have debts of $7.2 billion.

Reconciliation between the government and the opposition does not appear likely in the short- term.

The measure under consideration to restrict Venezuelans coming into St. Lucia comes amid statistics from the United Nations Human Rights Council (UNHRC) that claims 52,000 Venezuelans so far this year have applied for asylum in several parts of the world.

United States President Donald Trump has said he is not ruling out a military option in dealing with the crisis in Venezuela, an option Chastanet does not support.

According to the Prime Minister, St. Lucia has always held the position whereby it would not support any foreign intervention into Venezuela — whether by the United States or any other nation.

“St. Lucia will not support any foreign intervention into Venezuela. We believe this has to be a homegrown situation and St. Lucia’s position clearly is that we all should get together and put pressure on the opposition and the government to resolve their matter,” Chastanet said.

He added: “As a hemisphere, we have failed. We have failed both in terms of establishing very clear parameters (and) in terms of how we are going to solve problems in this region. So continuously, we are seeing situations like Venezuela arise and we are struggling to find a solution to the problem.”

He continued: “If we truly believe in the rule of law, truly believe in democracy and uphold human rights, whatever your ideology is, it does not matter. As long as you are having regular elections and you are confining your actions towards the law that you have, then we should not have any problems. The moment any government breaches those things, then, I think, we all should respond and say that this becomes a necessary step before we can begin conversations.”

Chastanet blames both the opposition and the government for the situation in Venezuela. He said the opposition is equally wrong in some of the things it is doing because it is not adhering to the rule of law, democracy and human rights.

“What is happening in Venezuela is that the people aren’t coming first. It seems that all the politicians are fighting,” Chastanet said.

Chastanet said Venezuela had breached the rules by arresting members of the opposition and suspending its duly-elected assembly. He said that while CARICOM is attempting to play an arbitrary role to facilitate discussions, there are some who believe Venezuela needs to first accept certain basic principles.