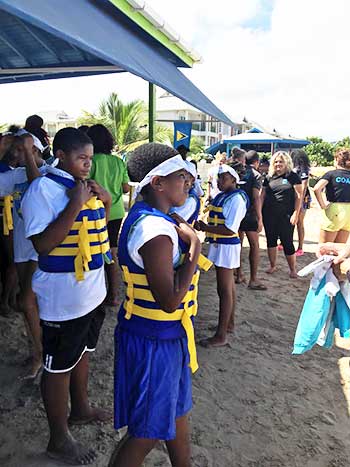 PRESS RELEASE – THE St. Lucia Stars are giving their time and energy off the pitch to ensure that children from underprivileged communities have some fun this summer.

Team captain, Saint Lucia’s own Daren Sammy, and several other team members, came out to participate fully in the series of games with the children.

Participants were divided into teams and competed against each other in beach volleyball, an obstacle course and other activities in the water park that was set up for the event.

Media coordinator for the St. Lucia Stars, Sue Monplaisir, said this was the franchise and players’ way of giving back to the island. This was the second time that the event was being hosted along with the support of Bay Gardens Beach Resort and Spa via its donation of its Splash Island Water Park as the venue.

She was heartened by the feedback from last and this year’s participants and said the intention was to make it an annual event.

Participants were treated to refreshments after completing the series of fun and energetic activities in the water and the winning teams were recognized for their achievements. The event was a success and met its aim of giving the children an enjoyable and memorable experience.