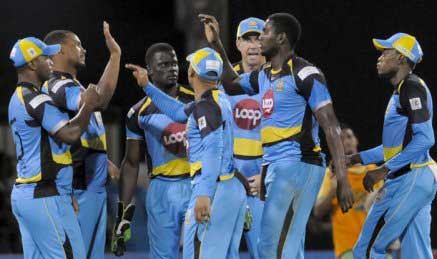 LOCAL cricket fans will be keeping their fingers crossed for the St. Lucia Stars when they play defending champions Jamaica Tallawahs in Jamaica tomorrow evening.

The St. Lucia Stars have not won a match in this year’s tournament, losing all eight matches played to date.

A surprise win will bring a sigh of relief to the fans and the new owners as they have already indicated that the team will be a force to be reckoned with in future CPL tournaments.

Meanwhile, a resurgent Guyana Amazon Warriors side completed a comprehensive seven-wicket victory over the out-of-sorts St. Lucia Stars to cruise to their second consecutive home win in the Caribbean Premier League (CPL) at the Guyana National Stadium at Providence on Tuesday evening.

The Warriors completed the triumph in front of a vocal home crowd with relative ease after being 41 for 2 at the end of the first power play with SohailTanvir unbeaten on 22 and Jason Mohammed who had just arrived at the crease on nine.

Chadwick Walton (0), who failed to repeat his heroic performance from last the match, fell to seamer Jerome Taylor, first ball of the reply.

Skipper Martin Guptill (8) was the other man dismissed, falling to off-spinner Rahkeem Cornwall to continue his lean patch.

Tanvir, however, an unlikely hero with the bat, and the reliable Mohammed then combined to post 51 runs for the third wicket, during which time they also pushed the Warriors past the 50-run mark, at the end of the eighth over.

The duo was the perfect foil for each other with Tanvir being the aggressor while Mohammed comfortably rotated the strike without much discomfort.

Tanvir, however, fell for 38 with the Warriors needing 28 more runs for victory. His innings, which spanned 29 deliveries, inclusive of five fours and a maximum, was crucial in the Warriors getting home comfortably.

Mohammed, who ended the match with a flurry of boundaries, was unbeaten on 42 after striking three fours and two sixes, and along with Gajanand Singh (8) saw the Warriors home without further loss with 5.2 overs to spare.

The Stars, who tumbled to their eighth straight defeat, were sent in to bat after losing the toss and found themselves staring down the barrel early on after being limited to 35 for 3 in the eighth over with Andre Fletcher (1), newly-appointed captain, Shane Watson (0) and Johnson Charles (15) all back in the pavilion.

A hobbling Jesse Ryder and Sunil Ambris, however, attempted to consolidate the innings to see their side post 46 for 3 at the halfway point as the Warriors’ bowlers completed a clinical first half.

Ryder (19), however, soon after perished via the run-out route to a brilliant piece of fielding by live-wire Keemo Paul as the Stars slumped to 47 – 4 in the 11th over.

The stage was then set for discarded captain Darren Sammy (19) who fell LBW to Rashid Khan in the 16th over, having little impact on upping the scoring rate as the Stars crawled to 73–4 at the end of the 15th over.

The Stars, who are languishing at the button of the table, played like it and ended their innings on 100 – 7 after Taylor smashed the final ball of the innings bowled by RayadEmrit for six.

Warriors’ bowling, especially the spin trio of Steven Jacobs (0-16), Khan (2-19) and VeerasammyPermaul (1-16), combined for 12 stifling overs while Emrit’s 2–26 chipped in meaningfully to support the slower bowlers.

The Warriors are now set to play their final two matches against the Tridents and Tallawahs away and will have to win handsomely in order to boost their chances of qualifying for the playoffs.