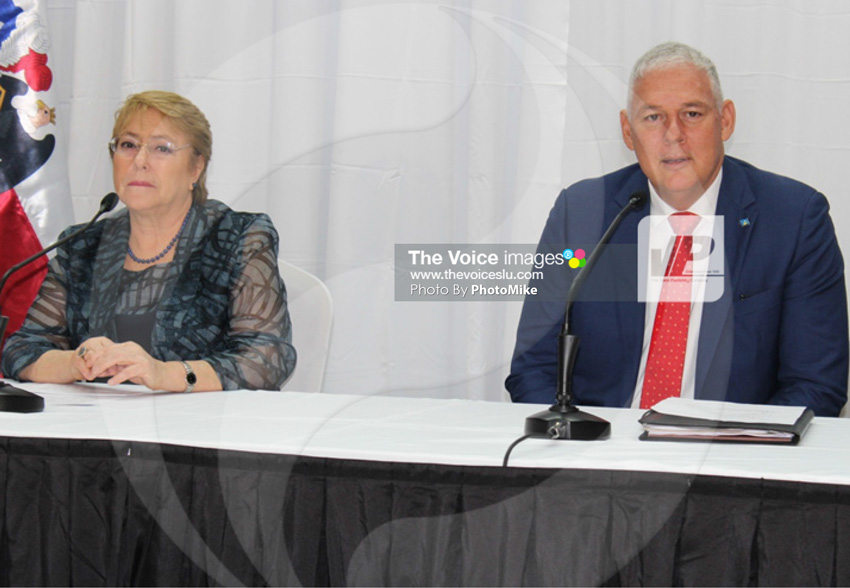 THE heads of government of St. Lucia and the Republic of Chile have agreed to deepen bilateral cooperation between their two countries.

This agreement was arrived at during a two–day visit to St. Lucia by Chilean President, Michelle Bachelet, her ministers of government and a contingent of journalists from her country, which ended yesterday.

Prime Minister Allen Chastanet and Bachelet also plan to deepen cooperation in areas such as agriculture, trade and climate change.

The desire to forge closer ties with each other was vividly expressed at a news conference yesterday at the Financial Complex at Pointe Seraphine where Chastanet and Bachelet spoke of an agreement which, they say, could deepen the ties of friendship between their two countries.

“It’s been a pleasure having you here. I am very much looking forward to be able to announce at a later date an even stronger cooperative agreement than we have had in the past,” Chastanet told Bachelet at the news conference comprising Chilean and local journalists.

“I hope that the sort of route map we have put up, (that) we would fulfill it and be able to, as soon as possible, sign an agreement that would further our ties,” Bachelet responded.

Bachelet and her contingent arrived in St. Lucia via Hewanorra International Airport on Thursday afternoon. She received an official welcome and paid a courtesy call on Governor General Dame Pearlette Louisy that same day.

Yesterday, she met with the Cabinet of Ministers, Heads of the Organization of Eastern Caribbean States and the media.

Bachelet and Chastanet both expressed their pleasure at meeting each other, with the latter describing the occasion as “incredible” and the former as “historic” — it being the first time a Chilean president had visited St. Lucia officially.

“I have found the last couple of hours spent together incredibly fruitful, almost begging the question why we have not had this meeting before,” Chastanet said.

Chastanet spoke of the common experiences both countries shared — such as storms, floods, fires and earthquakes — and how trade between Chile and Saint Lucia could increase and Chile could help St. Lucia grow its agriculture sector.
“We also had the opportunity to discuss regional issues — both from the OAS and the UN — climate change at COP21 and the current situation in Venezuela,” Chastanet said.

Bachelet, for her part, spoke of having a fruitful meeting with the Cabinet of Ministers, the excellent relations between the two countries since they established diplomatic relations in 1991 and the several points of interest the two countries share, like respect for democracy, human rights, the rule of law and the environment.

“We have been working bilaterally with St. Lucia but in the context of CARICOM (and) in the context of the OECS. We will continue working and focusing on areas such as poverty eradication, agriculture, disaster prevention and management, adaptation to climate change and strengthening good practices,” Bachelet said.

She also committed to the government a gift of US$100,000 to go towards women who are desirous of starting their own businesses, a gesture Chastanet welcomed and thanked her for, saying that developing the entrepreneurial spirit in women was very dear to his Cabinet.

“Our donation will come here as soon as possible so that women who want to start a business can have the possibilities and the capacities to do so,” Bachelet said.