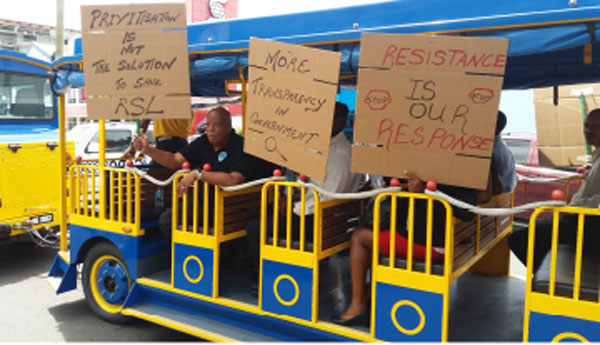 ALL efforts to convince the government to keep Radio St. Lucia (RSL) on the air have failed. As Monday of this week, employees were given termination letters, officially closing down the station after 46 years of operation.

A protest by members of the Civil Service Association (CSA) on Monday afternoon on board the trolley train through the streets of Castries in solidarity with RSL employees was merely a symbolic gesture as it did not reverse the action of the government.

Government had also been called upon not to close the radio station by both past and present employees, all to no avail.

There was expectation that things would be better for staff once the station closed as they would seamlessly take up employment at the Government Information Service (GIS). That assurance was made several times over the past several weeks by Information Minister, Dominic Fedee and Prime Minister Allen Chastanet.

Fedee on Monday afternoon repeated that there were opportunities where staff of RSL would be merged in GIS, adding that government will do everything in its power to find employment for the workers in the civil service or statutory organizations.

However, Claude Paul, General Secretary of the CSA, dismissed Fedee’s pronouncements, stating that government all along had not been clear about its intentions concerning public broadcasting outlet.

“The government’s proposal that RSL would join GIS is one that has been on the table before, even with the last administration. It went nowhere. It had not been discussed with us,” Paul said.

Paul said the least government could have done was to meet with the CSA.

“I think we should have had the benefit of a discussion with government or someone,” Paul told The VOICE yesterday.

Paul added: “There has not been the openness I expected from the government, except we hear from time to time the Minister (Fedee) making pronouncements. However, we will remain vigilant.”

Since Prime Minister Chastanet revealed in May that RSL would be closing down, there have been continuous pronouncements from Fedee on the subject.

Just over a month ago, Fedee said there were several options on the table for discussion over what should be done with the radio station. One of the options he mentioned was a merger with the GIS. Although he promised to give more details about the options prior to the station’s closure, he did not and the merger with GIS has not happened.

Whatever action plan the government may have had — or has — for the radio station seems not to have been adhered to.

Paul said government had not communicated officially with the CSA on the situation with RSL, claiming that a letter Fedee said he sent to the CSA was never received by the CSA.

He said RSL’s Board of Directors reviewed the operations of the radio station and made recommendations, adding that efforts by him to get a copy of that report were futile.