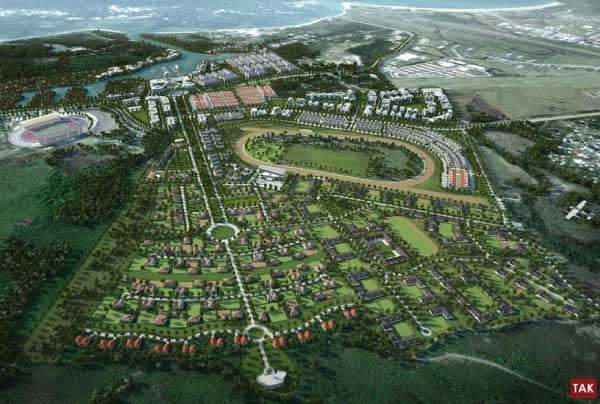 AN application by Desert Star Holding (DSH) Caribbean Star Limited for tourism incentives to facilitate the construction and development of the ‘Pearl of the Caribbean’ project has been dealt with favourably by the Cabinet of Ministers.

A Cabinet Conclusion dated July 3, 2017 noted that Cabinet considered a Memorandum dated May 25, 2017 submitted by the Department of Tourism and Information and Broadcasting and pursuant to the Tourism Stimulus and Investment Act No.12 of 2014, approved a number of things on behalf of the subsidiary companies of DSH Caribbean Star Ltd.

What were approved were to facilitate the construction and development of the US$2.6 billion ‘Pearl of the Caribbean’ project earmarked for Vieux Fort.

The Cabinet Conclusion made it clear that the approval given was “pending proof of full Development Control Authority (DCA) approval.”

Cabinet gave approval for the construction of the ‘Pearl of the Caribbean’ to be declared an approved development and on behalf of Royal (St. Lucia) Crescentia Limited – a subsidiary company of DSH Caribbean Star Limited – approved 100 percent waiver of Import Duty and Value Added Tax on all building/construction materials, furniture, fixtures, fittings, soft furnishings, kitchen and bar appliances and equipment, cutlery, glassware and laundry equipment required for the homestead villas/barn.

Also approved were a 100 percent waiver of Import Duty on imports of alternative energy and energy saving equipment, devices and fittings used for equipping the homestead villa/barns; 100 percent waiver on Property Tax in respect to several parcels of land for a period of 20 years commencing July 1, 2017 and terminating June 30, 2037.

Also approved were 100 percent exemptions from the payments of Stamp Duty and Vendor’s Tax on the conveyance or transfer on sale of any immovable property for the approved tourism project on the initial sale, and 100 percent waiver on Import Duty and Excise Tax on the purchase of several vehicles.

Another subsidiary company to get incentives from Cabinet is the Royal Saint Lucia Tuft Limited, which also received a 100 percent waiver on Import Duty and Value Added Tax on all building/construction materials, operating equipment, furniture, fixtures and fittings, kitchens/bar appliances and equipment, required for the construction and equipping of the grand stands, mixed used buildings and race track. The company also received other concessions as well.

Prime Minister Allen Chastanet earlier this week noted that while the DSH project has not yet received CIP (Citizenship Investment Programme) approval, there has been constant dialogue between the parties.

He told reporters that while government had changed several things about the programme, government was also trying to negotiate a format that would be beneficial to the developers as well as to St. Lucia.

“We would like to think that we are very close to a conclusion and once we are, I would be happy to make those details known to you, the public of St. Lucia,” Chastanet said at Monday morning pre-Cabinet press briefing.

In terms of incentives given to the company, he said they are tourism incentives as there are aspects of the project, such as the construction of a hotel, a villa complex and other constructions that fall under the Act.

He said incentives were also given under the Special Development Areas Act: “All the incentives given are within the regulations that we currently have, so nothing extraordinary was given to them that have not been given to anybody else.”