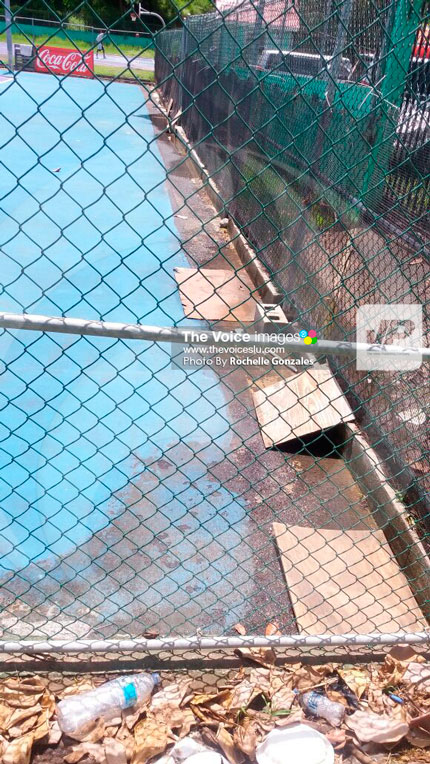 AS flooding continues to be a major pain for the association in charge of the Kenneth “Wriggler” King Multi-Purpose Centre on Darling Road in Castries, more calls are being made to help to solve the problem.

Sirsean Arlain, Director of the Tiger Tennis InFLOW Academy, told The VOICE yesterday that while the association board on which he sits is doing all they possibly can to address the matter, which costs them thousands of dollars in upkeep annually — they cannot possibly do it all on their own and some much-needed aid would be greatly appreciated.

This comes in the midst of the annual Coca Cola ITF Tournament, which is currently taking place at that facility.

The tournament was previously to take place in Castries and Beausejour; however, Mother Nature threw a few spanners into the works and heavy rains, which led to flooding of the court three times in four days, prevented the international tournament from taking place as scheduled.

On those occasions, Arlain gratefully credited the St. Lucia Fire Service and LUCELEC sub-contractors for stepping in to power-wash the tennis court and return it to impeccable conditions to host the tournament after the inclement weather has ceased.

Arlain said the two organisations had their work cut out for them, to the point that on one occasion while the Fire Service was washing down the court, there was more rain which flooded the venue again before they were finished the first time around.

He also credited Carasco and Sons, who helped to make the tournament more inviting after they supplied paint and plumbing that went towards the refurbishment of the bathrooms as well as the outside of the building and office.

Arlain said on days when there is heavy flooding, the workload is too much for the fire and electricity services, so they are forced to employ independent workers to shovel up and get rid of excess mud and debris that were deposited onto the court during the storms.

This, he said, is even more costly.

The problem exists even before entry through the main gate, as poor drainage has left a pool of moss and mud-filled water trapped along the side of the court, forcing visitors to carefully walk alongside the court entrance to avoid getting their feet wet.

Arlain said: “It would be great if we could get some help with the drainage to have it done properly so that this place doesn’t keep flooding. I’m sure there are alternatives because it was too costly to raise the courts, obviously, which is everybody’s favourite fix. But $1 million is not just floating around somewhere.”

Overall, Arlain said the committee manages to keep afloat by collecting fees from players, sports committees and private funding. However, he said: “There are lots of challenges, but we try to deal with them as best as we can as the days go by. So far, it’s been ok, but it’s not great.”

Arlain said while better drainage will not solve the issue completely, it will make a big difference and will serve as a major relief for the association.

The problem, he said is: “That drain is the only thing running off that large gutter (flood mitigation drain in George V Park) in Castries, so once that thing is filled, the water has nowhere to go, except on the only line that’s feeding out of it. So that’s basically what happens.”

He said the matter has not only become frustrating to them, but has also become a hindrance to the hundreds of children who utilise the court.

Arlain said: “It was really disappointing because in addition to having our schools’ tennis programme — dubbed the Kids InFLOW Development Series — it was actually a free summer camp for 120 students. Kids were in the programme and we extended it so that they would have summer tennis as well. It was our last week of the programme and that was cut short.”