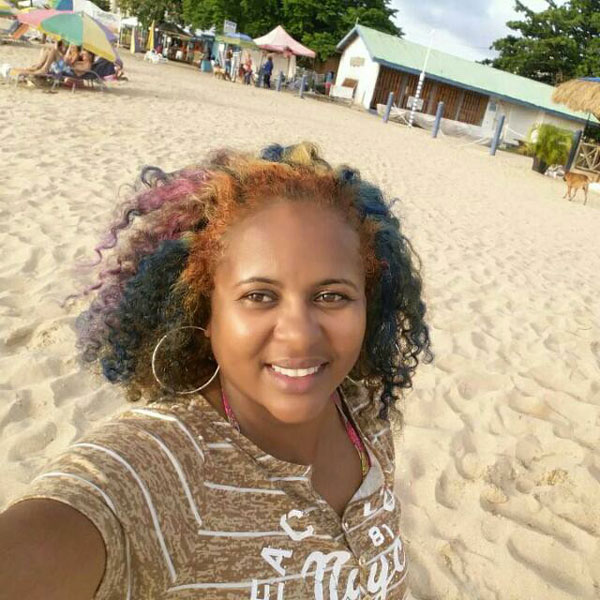 IMAGINE having a head full of beautiful hair that has seemingly led a life of its own. This is the case with Youth and Sports Officer with the Ministry of Youth and Sports, Saralee Williams, of New Village, Castries.

Bubbly warmth and fun exude from her as she brightens every room with her colourful mane and when you hear the story behind the colours, it just melts your heart.

But don’t be tempted to touch, though, because like many of Earth’s most beautiful creatures, you just might get a painful bite.

The VOICE: What the relationship with your hair like?
Williams: I remember always fighting with it when I was younger. It would not be controlled or do whatever I wanted. I wanted it to behave; like, why couldn’t it just lie down and be like everybody else’s? But then growing up, I decided that I’m not going to fight anymore. Then I realised my hair was just like my personality; if you try to stifle and contain it, it will lash out.

The VOICE: Tell me about your transition from relaxed to natural.
Williams: Four years ago, I was under a lot of stress and developed a mild case of Alopecia areata, where you get bald spots in your hair. It was caused by the fact that I was really overworked and tired and my hair just fell out, leaving me with bald patches. For me, that meant I had to stop putting the chemicals in my hair. The chemicals made no sense, either, because I would put the relaxer in and it would only last for about two weeks. My hair would just go back to the way it was.

The VOICE: When did you decide to start colouring, and why?
Williams: When I was about 18 or 19. I put colours over colours and that process makes new colours. I love seeing variations of colour in my hair and it really makes me feel alive. It’s an expression of whatever’s going on inside. My mom passed away in 2014 and it’s been really depressing. So when the depression gets really bad, I strike out through my hair. Blue is my favourite colour, so I go with it, but I’ve also had green, pink — you name it, I’ve had it. People smoke, some drink to cope when they are depressed, but I put hair colour, so you might notice that my hair colours are big and bold around July, September or October [July, my Mom’s birthday; September, when she died; and October, when she was buried].

The VOICE: In St. Lucia, there is still a dominance of backward thinking where hair is concerned. The public has had a lot to say about your hair and it gets to you at times. How bad has it gotten and how deeply has it truly affected you?
Williams: Some people look at me and they’re like, “Why are you always doing pappyshow with your hair?” or “You have such nice/quality hair…!” Now that offends me because I hate people using the terms like “nice hair” and “quality hair”. It’s like slavery all over again — differentiating people by hair types. They tell me I have nice hair but what is nice hair? You either have healthy or unhealthy hair but it’s time we start embracing whatever it is we have on our heads. To me, my hair represents who I am, it’s on my head, and I normally ask them: “When you look into the mirror, do you see my face? No, you don’t, so do you, and let me be free to be me.” I find that in society we always want to tell people how they should look or act. I mean, come on, let us live and let live. Sometimes there are people who are genuinely interested in the reasons why I colour my hair. At least then I can see it’s a genuine question but there are those who ask simply to criticise. The young ones embrace it, but it’s the older ones who always frown, saying that it’s nonsense. I really hate it.

The VOICE: Is there a flip side to the public’s perception of you and your hair?
Williams: On the flip side, there are those who look at my hair and are so happy to see it as it makes them feel good. I never knew it could have that effect but they tell me that they wished to put colours in their hair. But sometimes while the conversations are about hair, it’s not really about hair, if you know what I mean. They want to be free to do something, but they’re so stuck in their box and so afraid of what people think that they don’t want to dare to put colour. When people tell me about my hair, it tells me more about them based on their attitudes and what they have to say about me. They tell me their story through the way they speak about my hair.

The VOICE: I’m sure you get all sorts of people marvelling at your hair, like you mentioned, as well as people wanting to touch it. How do you feel about the touching, in particular?
Williams: I hate people touching my hair. I mean hate in every intense form of the word! I have allergies, so like if I smell peanuts, fish or whatever, it sets off my allergies. Now I don’t know where your hands came from, if you scratched wherever, I don’t know. Once, a girl tried to touch my hair and I told her not to, she said to me that she wished it would all fall off. I mean, what kind of thing is that? She walked away but people can just be so mean.