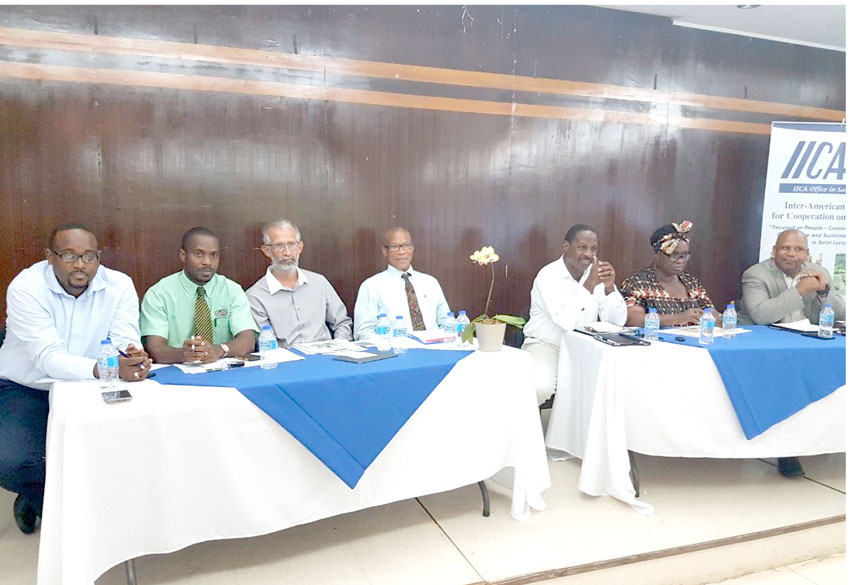 An active step has been taken towards bridging the existing gaps and remedying the many ongoing issues between the government, farmers and fishers on the island.

A seven-member panel discussion was held at the Union Orchid Gardens on Thursday involving an Inter-American Institute for Cooperation on Agriculture (IICA) delegation, as well as key stakeholders of the agricultural sector, namely fisheries and natural resources. The panel met to discuss the allocation for agriculture in the 2017/2018 budget.

During the discussion, Agriculture Minister Ezechiel Joseph had a lot to answer to. Also present at the discussion was Executive Director of the St. Lucia Chamber of Commerce, Brian Louisy.

He said that while Minister Joseph made an effort to give the required information, the Chamber needed to know more.

“We are of the view that he did attempt to respond to some of the issues, but then there were outstanding issues that we feel were needed to be addressed,” said Louisy.

Louisy said he believes the incentive framework to support agriculture needs to be revisited and put in line to better support the business sector.

As far as the Chamber is concerned, he said they are seeking to better understand how the government intends to move forward with the St. Lucia Marketing Board and the Fisheries Cooperative.

He said: “We are of the view that there have been significant challenges with the Marketing Board functioning in the capacity that it needs to function. We think that we need to see what the plans are and how the government intends to continue to support how it can market agriculture.”

The Co-op, he said, has been facing financial losses and has been unable to make payments to fishers and that this needed to be resolved.

Meanwhile, Joseph said government was actively trying to help local farmers and fishers and is currently coming up with options focusing on restructuring the entities.

“The Prime Minister said that the St. Lucia Marketing Board has to be closed and, yes, we can’t continue the way it’s operating right now,” said Joseph. “The Cabinet of Ministers believes that there’s need for us to look at a new structure and entity that can really give the support to our farmers because marketing is critical for agriculture.”

“The Fish Marketing Co-op, likewise, we saw in 2011 to 2016, almost $15 million was given to the FMC to support it… We cannot continue that way; we need to restructure St. the Lucia Marketing Co-op,” he said.