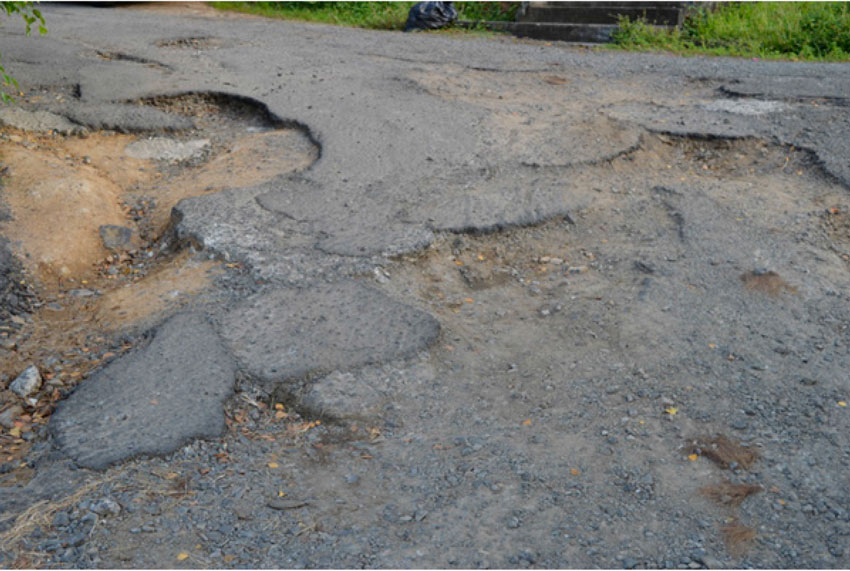 TRAFFIC along the main road leading to the top of Corinth — turning right after Riverstone — has been reduced to snail’s pace and residents want the authorities to rectify the problem.

With the road in such a deplorable condition, residents say they will soon be forced to walk to their destinations or return home. Most of the roadway has no asphalt and at different points looks similar to a dirt track or an empty riverbed. Some sections of the road also have crater-like holes which pose a grave danger, especially at nights and when it rains.
“It’s just getting worse by the day and really need some urgent attention,” one resident said.

“It was all good and well for the politicians to find their way up here one year ago seeking and trying to convince people to vote for them,” another said. “Now that the elections are gone and the dust is settled, we are the forgotten ones.”
One vehicle owner said that in the space of four months, she was forced to spend thousands of dollars to replace parts for her vehicle due to the poor road conditions.

“In March of this year, I contacted the Ministry of Infrastructure and asked that the road be repaired but to no avail,” a hotel employee said. “I have been continually told that there is no money, but the main stretch of road was repaired from the junction near Riverstone, all the way down to the back of Flow in Corinth not too long ago.”

Meanwhile, residents are concerned that it might only take another heavy downpour of rain for the portion of the road to disappear completely.