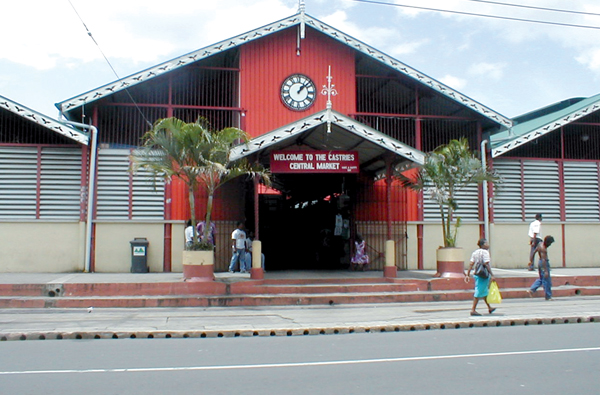 THE recent announcement by the Prime Minister that government intends to make the famed (even by National Geographic Explorer) more hospitable is a great sales pitch, even to vendors. However, that momentum needs to be kept if any serious effort at arresting the deplorable conditions that exist there can result.

Named third-best food market in the world by National Geographic about a year or two ago, Castries Market is a microcosm of Saint Lucian life: people coming into contact with each other for friendly bargaining with sales pitch that are often more soulful than business like.

The market, which opened in 1894, is home to many businesses that provide incomes to households and contributes much-needed produce to kitchens with a taste for locally-produced fruits, vegetables and other items. However, the facility’s infrastructure has, to some extent, long outlived its era.

For starters, with limited space available for vendors to ply their trade, navigating through the maze of stalls and trays can become cumbersome for even those who make the journey there regularly. As such, the Castries Constituency Council (CCC) might want to consider setting up various units that are more conducive for vendors and buyers alike. Moreover, the practice of vendors selling their produce on the very roadside where rats and other vermin traverse should be abolished for many health reasons.

Over the years, it has also become the norm that vagrants have taken up residence on vendors’ trays at nights. In certain areas, urinating and defecating continue to be a major problem despite comfort stations placed conveniently nearby. If customers are to spend their hard-earned dollars for items, they should at least be given the assurance that they are doing so in a safe and healthy environment.

Many vendors are understandably concerned that some of the proposed changes for Castries Market might redound to them shelling out an extra few dollars in rentals to the CCC. If that truly is the case, then the increase should not be exorbitant to deter them from offering a service they do with cheerful, pleasant smiles and often reduced prices.

There is no denying that Castries Market needs a facelift. In that vein, liaising closely with the vendors whose very business depends on the facility for their survival must be essential. In fact, the Prime Minister’s visit there last Saturday was indeed a welcome sign that government recognizes that fact. Castries Market needs to sell itself without even trying.