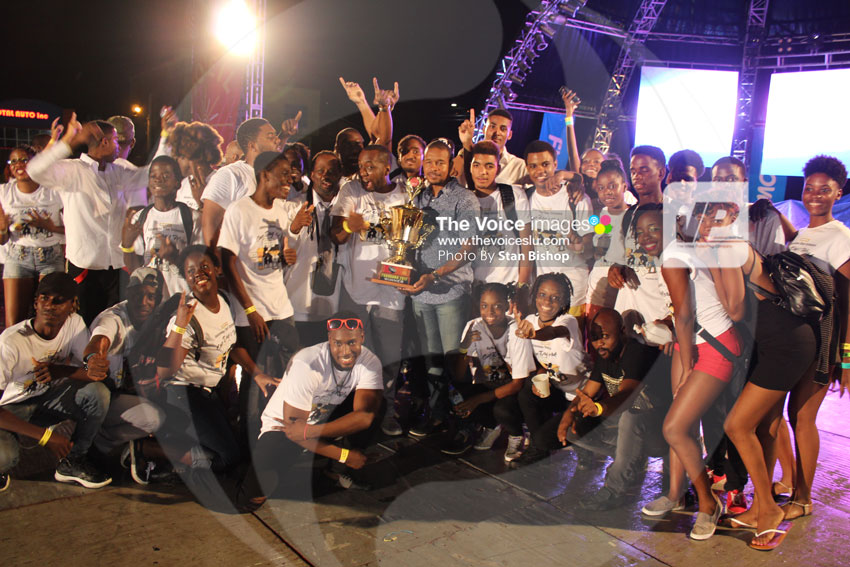 DESPITE the recently-concluded Carnival season receiving favourable reviews in many aspects, organizers are already mulling executing an even more impressive product next year.

The season, which officially ended just over three weeks ago, produced some major improvements: top quality calypsos, record attendance at shows and was virtually incident-free as it relates to violence. Moreover, Thomas Leonce, Chief Executive Officer, Events Company of Saint Lucia (ECSL), told The VOICE over the weekend that the ECSL was satisfied with how things went.

“In the end, we’re not doing it for ourselves but for all the patrons who attended the various events,” Leonce said. “So far, I think the feedback has been largely positive.”

Leonce said the ECSL commenced operations last February and immediately went about implementing plans for the hosting of the Jazz Festival, Roots & Soul Festival and Carnival. He described the relatively short space of time to adjust as “a hectic pace for the team”.

He said some bold moves were made regarding Carnival, including the choice of venue for the major events to close off the Carnival weekend. He said that despite there being some skepticism about the venue change, “it was a very good move” for many reasons.

“Our major thrust was to try and bring Carnival closer to the city. I think the Sab presented us with the perfect opportunity. There’s a lot of work still to be done on that venue to make it into the best shape possible. I think the main consideration for us would be parking – so that is something that we have to think about a lot more in 2018. But based on the numbers that attended all the events at the Sab, I think it was a good choice. Also, most people thought it was a good choice,” Leonce explained.

He added that while security was a major concern initially, the Royal St. Lucia Police Force is to be commended for ensuring that things went smoothly. Based on feedback from the J’Ouvert bands especially, he said police officers were out in large numbers quelling minor incidents before they escalated. That, he said, needs to continue.

“Of course, security has to remain at the forefront because we are inviting people from all over the world to come and witness Saint Lucia Carnival and we want to continue to ensure that they do so in a safe environment…I think it was very important that the season was incident-free. If that word spreads out there, then it speaks well for Carnival 2018,” he explained.

Leonce said calypsonians felt comfortable that the season would be well-managed, given the collaboration that existed between the Carnival Management Committee (CMC) and Events Company. He believes that confidence translated into the production of great songs that kicked off the season on a high.

“What happens in the calypso tents is a good foundation from which to springboard the rest of the season,” said Leonce. “So if there’s a situation whereby the calypsos are not good early in the game, it creates a damper for the rest of the season. Calypso is like the fuel for the season. So calypso is something that we need to continue nurturing so as to ensure that it comes good every year.”
He said plans are afoot to have all community carnivals end before the final Parade of the Bands next year. This year, bands from Gros Islet and Anse La Raye participated in the National Junior Carnival while Meltdown XD from Vieux Fort participated in the National Parade of the Bands. Even one of the contestants in the Valley Carnival from last year, Perdell Williams, was a contestant in this year’s National Carnival Queen Pageant.

“There (are) some (changes) happening despite not in a structured way. So we need to do more of that next year by making sure that all community carnival activities fit into the main event. I think it will augur well for Carnival as a whole,” Leonce explained.

Terry Finisterre, Flow Communications Specialist, said Flow – platinum sponsor of Saint Lucia Carnival – had to adjust to the new paradigm of the festival falling into a series of festival – Soleil – as well as working with the new ECSL.

“We were feeling our way through it at first but were eventually pleased with the outcome,” Finisterre told The VOICE. “We were also pleased with the reception the Carnival-related various shows got. When you look at the attendance at some of the shows, obviously the quality of the performances and the content material played a substantial role. But I also think there were a number of innovations made that lent themselves to having a really Carnival season.”

Apart from the core Carnival events, he said Flow was involved in Transcend, U4RIA, Mess and other aspects of Carnival. Overall, he said Flow was “very pleased to see professionalism go up a notch. The level of excitement and organization also did. Overall, Saint Lucia has to be very proud of what we have done this year.”

As to what should be changed for next year, Finisterre said despite the Sab being chosen over Daren Sammy Cricket Ground and Mindoo Phillip Park for the major events, the new venue turned out to be a good one in terms of its ability to accommodate and attract people. However, managing the venue needs to be beefed up to make the shows even bigger successes. As a company, he said Flow would also like to see more effort go into building up the events by really getting into them more deeply.

Director of Carnival, Teddy Francis, has overseen the execution of Carnival plans for many years now. He believes this year’s product was generally “very good, particularly in terms of calypso’s big bounce back.”

“Calypso has always been the foundation of the festival that has served to trigger a feel-good attitude and put everybody in the mood to support Carnival,” he told The VOICE.

Francis said the Sab Facility was chosen over Mindoo Phillip Park for many reasons, including MPP’s drainage problems, especially whenever it rains, as well as easy access to and from the venue.

He said despite the many challenges organizers faced this year in putting things together, there were many notable pluses recorded during the season.

“In many other Caribbean countries, the traditional aspects of carnival are crumbling, including calypso,” Francis said. “It was a major victory that our King and Queen of the Bands show was spectacular this year – one of the best ever.”

While he admits that much work needs to be done in the development aspect of Carnival throughout the year, Francis said the hope is that the Cultural Development Foundation (CDF) gets the support through government to keep the momentum going. The development of Junior Carnival at the community level by improving the quality of costumes, he said, is one such crucial area that needs to be targeted on a long-term basis.

“The development of the Carnival product must happen between September and January, so that by February we begin to execute the various aspects of the festival…If we start Carnival in March and April, we will always be just executing and not developing,” Francis said.