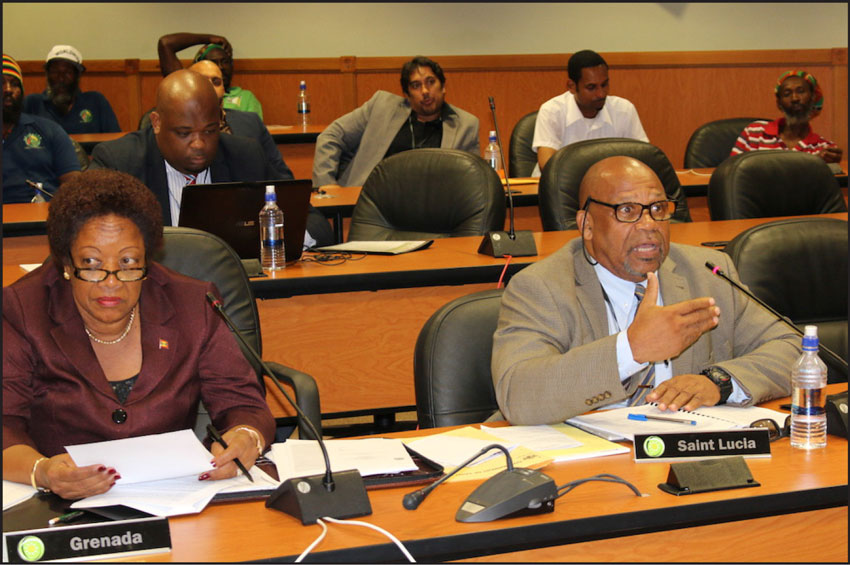 Recommendations to take the OECS Agri-Export Initiative to the next level were reviewed by regional agriculture stakeholders convened at the 4th Meeting of the OECS Council of Agricultural Ministers held in St. Vincent and the Grenadines on July 25.

The OECS shipping initiative aims to complement existing regional trade by positioning the sub- region to capitalise on new opportunities and to better exploit underserved markets within the region and internationally.

Minister of Agriculture in St. Vincent and the Grenadines, Saboto Caesar, said a key aspect of the way forward is to ensure that agriculture stakeholders participate at the highest levels.

“We expect the private sector to come on board to assist in moving commodities intra regionally.

“We have a very large food import bill in the intra-region and careful analysis and study has to continue to determine where we are going to move goods,” said Caesar.

Caesar also elaborated on the benefits of a trade arrangement between the government and people of St. Vincent and the Grenadines with neighbouring Grenada with hope that a similar model can be replicated amongst OECS Member States.

“We benefit significantly each year from moving cattle between the islands. We want to ensure that the positives of this bilateral relationship are placed on a multilateral footing for the benefit of stakeholders in the agricultural sectors of the sub-region,” said Caesar.

OECS Director General, Dr. Didacus Jules, said the Agri-Export Initiative has provided a focal point that will lead to the full implementation of the OECS Agriculture Plan of Action (APOA).

“Our food import bill in the OECS stands at half a billion U.S. dollars and, if you think of it, the import substitution possibilities of that market are huge.

“Import substitution would mean foreign exchange savings for our countries; it would mean greater employment in rural areas, especially for young people and women; it is going to mean healthier lifestyles, because it is the imported foods that are producing the non-communicable diseases,” said Dr. Jules.

Dr. Jules also spoke on the initiative’s priority to engage young people in agriculture through innovative projects and the use of new technology.

“Great effort has been placed on finding ways in which we can encourage and stimulate young farmers to get involved in the trade, so that we can create a new era of prosperity in this region,” he said.

Private sector representative, Jai Rampersad, General Manager of Bunny Imports and Exports Ltd., delivered a presentation to the Council of Agricultural Ministers which outlined key areas that need to be addressed if the sub-region is to maximise the opportunities available through the Agri-Export Initiative.

Rampersad’s presentation centered around the following:
• food standard certification (GAP, HACCAP and securing organic certification);
• detailed analysis of markets for agricultural commodities;
• adoption of an aggregator model (a draft model was proposed for the consideration of the Council);
• greater adoption of technology (specifically those that can prolong produce shelf life); and
• establishment of a unified OECS brand.

The OECS Council of Agriculture Ministers welcomed these suggestions and recommended further discussion on support systems to complement the new model, which include mechanisms to ensure information sharing and a review of the general approach to crop production in the sub- region.

Caesar expects to see outcomes of the meeting begin to materialise in the coming months.