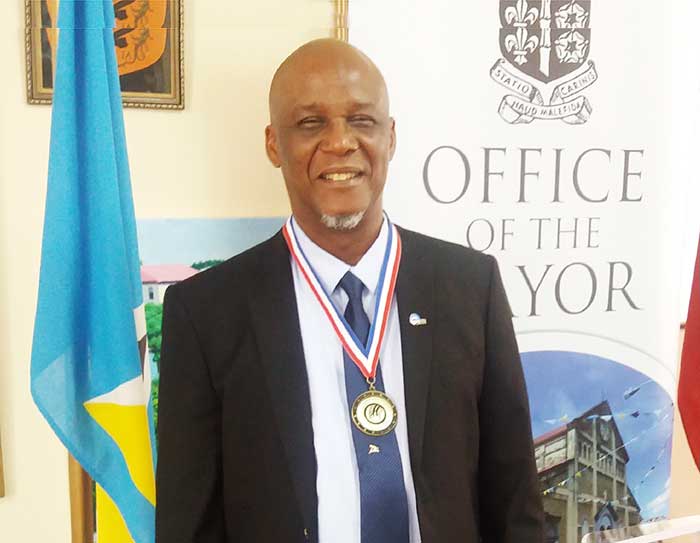 THE Mayor of Castries recently returned from a U.S. visit and announced at a press conference yesterday morning that he was the bearer of great news.

In his office at the newly-refurbished Castries Town Hall, Francis said the trip was strictly for learning purposes, as he left all grandeur behind and went with an entourage of only two.

Francis said that while in the U.S., he met with key individuals in the business and government sectors.

During his trip, the Mayor met with President of the Greenwood Cemetery, the reason being the fact that the Vigie cemetery has reached its capacity. Francis said the trip was very strategic, hence the reason for the visit to Greenwood to observe the operations of the burial grounds to emulate some of these.

He said: “We’re contemplating spending $1.9 million to reclaim some land to get an additional 400 tombs. But when we look at it, we say it is better to see whether we can start something new.”

Some feasibility studies, he said, have already been done and land has already been identified around the Deglos area, which is being explored as a viable option for a new cemetery.

The Mayor said there is also potential for a touristic industry. “You have certain people who come to mind, like John Compton, we have Jon Odlum, and look now we have Derek Walcott. This is actually an area in history for people to go to the cemetery to see that there is a section that people could actually visit.”

Perhaps the most pressing aspect of the trip was his visit to the famous New York Police Department (NYPD). “The NYPD actually brought us to the nerve centre of what and how they solve crime, and the solving of crime is data and statistics. They showed you how they do it and to be on the ground.”

He continued: “New York now has reached a point where they used to have 9000 murders a year. As we speak, for the first time in the history of New York, they are now at 347 and they are expecting that if nothing tragic happens, that New York, for the first time, is presently looking at 347 murders and that is all through data and statistics.”

The Mayor said the hierarchy of the NYPD will be coming to St. Lucia to offer training and to do an assessment of what needs to be done to sharpen up on the island’s Royal St. Lucia Police Force.

Francis also met with the District Attorney, who told him that their main objective is not to simply make arrests but to prevent crime in the first place. This, Francis said, is a far cry from St. Lucia.

He said this is the direction that St. Lucia has to move in and the doors have now been opened for a close collaboration with hopes of twinning the island with its U.S. counterpart.

Another part of the mission involved a visit to the NYC Department of Small Business Services, where the staffers go above and beyond to generate and to provide aid for people seeking employment.

He said he is hopeful that the powers that be will give them the leeway to do that. The process is to commence from November onwards following the NYC Mayoral Elections.