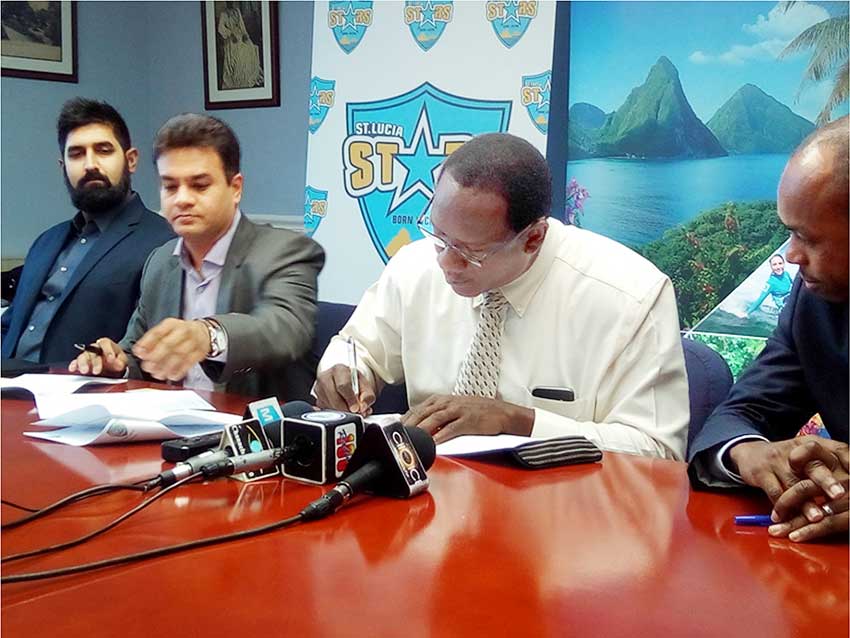 THE hosting of cricket matches in St. Lucia under the Caribbean Premier League (CPL) franchise is no longer in doubt.

Montoute explained that while it was never a question of St. Lucia hosting the games, meeting the commitments associated with staging the games here were doubtful because of the economic situation facing the country.

“We were able to arrive at some common positions and through compromise we are happy today to come to an agreement where it has become possible for this year’s CPL matches to be in St. Lucia,” Montoute said.

Five games are slated to be played in St. Lucia featuring St. Lucia Stars, now under new management. The new owners needed some assistance from the Government of St. Lucia regarding the hosting of the matches.

For instance, prior to this year, St. Lucia contributed US$350,000 to the CPL. However, this year the asking contribution was higher — US$438,000. Government will also ensure the outfield for the games is in top condition and provide certain concessions to the new owners of the team, all in readiness for the start of matches on August 4.

“While we were not in doubt that we wanted the games, it was in doubt whether or not we could have met the commitments. But I am happy to say that we have come to some agreements that have made it all feasible,” Montoute said.

Dominic Fedee, Minister with responsibility for Tourism, who was on hand at the signing, expressed his Ministry’s pleasure at the games being held in St. Lucia and spoke of how important the cricketing franchise had become to St. Lucia’s tourism product.

He likened the CPL tournament as a sport development tool and a tourism development initiative and pointed to the significant contribution the tournament makes to visitor arrivals in the country.

“The CPL has had a significant impact on the visibility of the destination (St. Lucia). It is going to be on some major UK networks, which is a major market for us in St. Lucia as we seek to expand the tourism sector. The Ministry of Tourism stands ready to support this project,” Fedee said.

Fedee also spoke of the small hotel sector benefitting from the Caribbean market during the CPL staging of matches here.

“Rodney Bay will be abuzz. It will be a fantastic moment for everyone,” Fedee said.

Pandya explained that choosing to purchase St. Lucia Stars was a no-brainer. He said it was the only franchise left and after reading about the country and its culture it was an immediate sell.